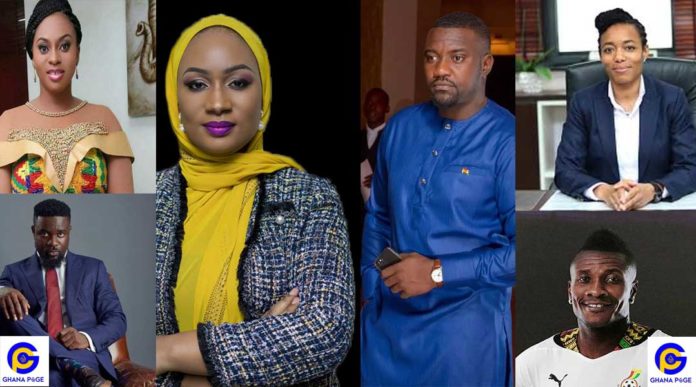 Running for a president in a country is a very huge task which requires intelligence, courage, integrity and also has a strong vision for the country’s future.

Never in the history of Ghana has a young person been elected as the President of the Republic of Ghana.

However, Ghanapage.com bring you 10 potential young people who could be leaders of the country due to their service to the nation.

Kojo Oppong Nkrumah is a Ghanaian politician and Lawyer. He is also the member of parliament for the Ofoase-Ayirebi constituency.

He was a broadcast Journalist but bowed out in 2014 to practice law. Kojo is currently the Minister for Ministry of Information and is the Cabinet Spokesperson on the Economy.

He additionally serves as a member of the Finance and Constitutional committees of the 7th Parliament of Ghana.

John Dumelo is a popular Ghanaian actor and entrepreneur. During the National Democratic Congress party’s campaign in 2016, he was one of the most influential and outstanding celebrities who campaigned for the NDC government.

It is rumoured that, as an appreciation for his engagement and patriotism to the Party, he was called and appointed by the former president of Ghana H.E John Dramani Mahama to serve his Party as a Director of Operations for a pro-NDC youth group for the National Democratic Congress (NDC).

ALSO READ: I am done featuring on songs for free -Medikal

Sammy is a Ghanaian politician who serves as Deputy Communications Director, National Youth Organizer and currently the National Organizer of the New Patriotic Party.

He is also the board chairman of the National Youth Employment Agency. He played a vital role in mobilizing the youth leading to NPP’s victory in the 2016 general election.

Samuel is a politician and is currently a Member of Parliament for the North Tongu in the Volta region.

Sarah is a politician and a Lawyer. She is the New Patriotic Party Member of Parliament for the Dome Kwabenya constituency of the Greater Accra region.

Sarah is currently the Deputy majority leader of Parliament of Ghana. She is the newly appointed Minister of State in charge of Government Procurement under Nana Addo Dankwa Akufo Addo of the Republic of Ghana.

Zanetor is the eldest daughter of the 1st President under the 4th Republic of Ghana Jerry Rawlings and former first lady Nana Konadu Agyeman.

She is currently the Member of Parliament for the Klottey Korle constituency.

Samira is the second lady of the Republic of Ghana. She is married to the Vice President of Ghana, Mahamudu Bawumia.

Samira is the founder and CEO of the Samira Empowerment & Humanitarian Projects (SEHP), described as a not-for-profit organisation established with the purpose of empowering the underprivileged in Ghana through diverse social intervention projects to improve lives.

She is the daughter of the president of the Republic of Ghana. Gyankroma works as a Director of Creative Art Council.

Sarkodie originally known as Micheal Owusu Addo is a Ghanaian award-winning rapper and an entrepreneur.

He is one of the celebrities that express their views over the state of the economy and in 2014 Sarkodie released a song dubbed ‘Inflation’ directed to the then President of Ghana, John Dramani Mahama over the high cost of living in the country.

Asamoah Gyan is a Ghanaian professional footballer who plays as a striker for Kayserispor and captains the Ghanaian national team.

He is the all-time leading goalscorer of the Ghana National team with 51 goals and is the top African goalscorer in the history of the world cup.