20-year-old man drowns in Weija river while being baptised 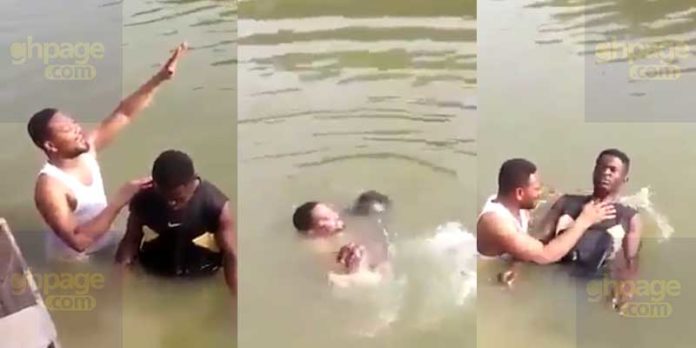 A video is fast circulating on social media that sees a 20-year-old man named Yaw Kyeremeh losing his life while been baptised in the Weija river in Accra.

As the customs in Christianity demands that a born-again Christian be baptised as John the Baptist did in the early days, the young man who in the video was seen being led by another man believed to be the pastor, to undertake his baptism couldn’t complete the baptism process and eventually lost his life.

He was the second person to be baptised as the first person was seen completing his baptism and walking out of the water.

In the video captured, after the man believed to be the pastor muttered some words of prayers, immersed him into the river; head backwards, and lifted him up the first time but strangely for Kyeremeh, he sunk deep down into the water just about the time he was being immersed the second time.

At this time, the pastor swam to safety while he called for help to retrieve Kyeremeh’s body but it proved futile as his body wasn’t found at the exact spot he drowned.

Per voices in the recorded piece, the baptizer and Kyeremeh were advised not to go far into the river for the exercise since it was quite deep.

Watch the sad event below…