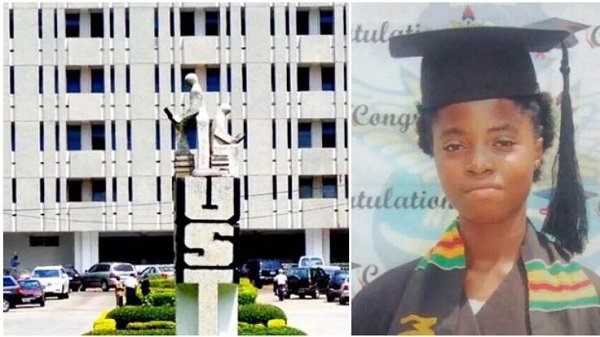 The Kwame Nkrumah University of Science and Technology has admitted a 13-year-old girl as the youngest student ever into the university.

Ruth Ama Gyan-Darkwah who just completed SHS has recently been the headline for discussion among many Ghanaians after she was admitted into the KNUST.

READ ALSO: Ghanaian Celebrities Who Dropped Out Of School But Became Successful In Their Various Careers

A report from the Chronicle indicated that young Ruth was admitted to pursue a Bachelor of Science (BSc) in Mathematics at the University.

However, with all these achievements and records by this young mysterious girl, less information has been gathered about her and her background.

But don’t worry Ghpage.com got some unknown facts about this surprising intelligent girl and here’s it.

READ ALSO: Video: Afia Schwarzenegger ‘Mobbed’ after being spotted buying provisions for her sons in Kumasi

Reports revealed that Ruth Ama Gyan-Darkwah is a family member of the former chairman of the Electoral Commission (EC), Dr. Kwadwo Afari Gyan.

Although the fact is not well established as to ?how Afari Gyan relate to the 13-year-old in the family line, however, both are from the same family lineage and that probably may explain where her wide scope of knowledge comes from – Maybe it runs through the family.

* Ruth’s Father Is A Physics Teacher

Mr. Kwadwo Gyan-Darkwah is the father of Ruth, and he teaches physics at Prempeh College Senior High School.

Ruth lived with her father at the teachers’ bungalow of Prempeh College before gaining admission to KNUST.

We all know most 10-year-old children in Ghana always should be thinking about getting into junior high school, but the story of young Ruth is totally different.

Ruth entered into SHS which is St. Louis Senior High School at age 10 and She offered a course in General Science and successfully graduated in 2012.

* Ruth’s Elder Sister Will Graduate From KNUST At Age 18

Grace, who offers Political Science at the KNUST, will complete her tertiary education next year at age 18.

You Might Like To See Photos:20 unforgettable moments of the #NSMQ that will either make you cry or LOL