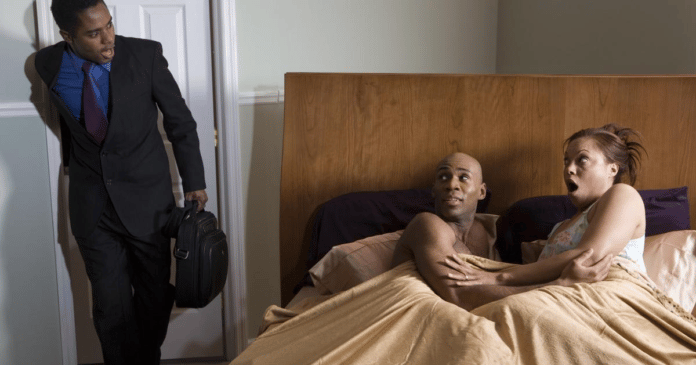 Are you looking for reasons why men cheat? Well, you can not understand their motivations entirely.

However, most of these men who cheat have no reasons at all and those who do, have reasons that completely do not make sense.

Now, let’s take a look at the 7 horrible;e reasons why men cheat.

Men who cheat believe they are getting even with their partners who have cheated on them.

Cheating might feel like a potent form of retaliation for a man who is upset with his partner for any reason (and pleasant, for a bit). You’re disrespecting two women here at once.

You’re retaliating against your spouse by using a woman you don’t regard highly. Any possible new relationship that arises as a result of adultery is tarnished by having a shaky foundation.

2, To deal with boredom

Men steal to pass the time because they are bored, as the proverbial saying goes, “The devil offers labour to the idle mind.”

While boredom can strike at any time, the transition from boredom to adultery should be carefully considered. Boredom sometimes goes hand in hand with unrealistic expectations, such as expecting your partner to indulge all of your whims and quirks. In part, this might be attributed to the Internet and its never-ending supply of pornography, especially among young males.

Real women have their own desires, feelings, and thoughts. Some men don’t have the patience to put up with women who are not ready to explore sexually.

Men occasionally cheat because they are unable to control their thoughts and maintain long-term faithfulness to their spouse.

The reason they cheat is because of this immaturity, which can occasionally be seen in their seemingly helpless attempts to send women away.

There is no other way to describe it, some men are immature. It’s not a weakness in their character, though; it’s more likely that they haven’t practised monogamy much. A man can find the idea of being in a committed relationship novel and fail to recognize the amount of labour required.

4, To deliberately end a relationship.

When a woman views infidelity as a deal-breaker, a guy who is unsure of how to end a relationship or marriage may use it as a tool.

This is cheating used to achieve a goal. Instead of ending things with your lover definitively, you decide to cheat on her and make sure she knows. This move is frequently easier to carry out for both men and women than ending the relationship.

In a twist on this issue, men may cheat because they wish to end their relationship with their current spouse but do not like to be by themselves. It is simpler to leave if there is someone else waiting offstage.

Men who struggle with addiction often turn to cheat.

Making decisions as a man who is battling additional issues, such as alcohol or drug abuse, may be difficult. In that circumstance, cheating is a sign of the bigger problem, addiction.

Another problem is compulsive sexual behaviour. Who you cheat on doesn’t matter as much if you’re using sexual urges to escape from the rest of your life or engage in compulsive fantasizing; what matters is that you’re getting distracted.

Some males commit fraud as a reaction to unresolved trauma. In this situation, you either act out the traumatic event from your childhood or subconsciously react to it.

Issues with intimacy and attachment are frequent signs of past trauma, and they make monogamy difficult for you to achieve. While having a secret sex life with other people is a terrific way to escape pain, it doesn’t address any underlying problems.

In Western culture, men are under enormous pressure to be young, attractive, wealthy, intelligent, athletic, witty, and so on. Cheating is a really good way to boost a sagging ego (for a little while). It’s less expensive than purchasing a convertible and a way to feel wanted and valued without being in a relationship.

Cheating has been normalized even in marriages. The pressure to stay ahead of the curve and sometimes to escape reality is the cause.

Most men are inundated with responsibilities and would not hesitate to spend time with a woman who makes them happy. Is that a good reason? Not at all.