7 preparations that prove Ghanaians are ready to mourn Ebony on 24th March, Number 2 will make you shed tears 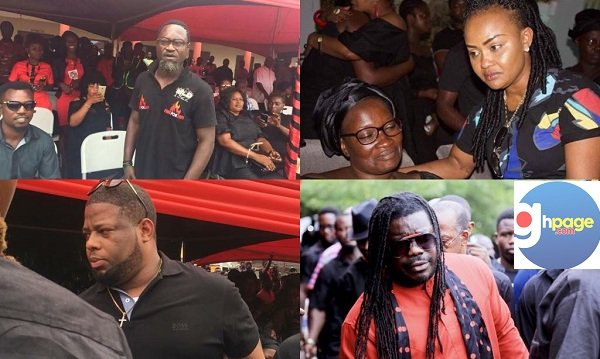 The news of Ebony’s death shocked Ghanaians as they could not come to terms with it, with many still not accepting her sudden demise.

She became the talk of town anytime she mounted a stage to perform; full of youthful exuberance making her give her best in entertaining music lovers on stage.

Official information from the late dancehall diva’s family revealed the final funeral rites and burial service for the late Ebony which will be held on March 24 at the forecourt of the State House in Accra after the initial date and venue was changed.

Time is fast approaching for the final funeral rites and burial service of the late dancehall diva and Ghpage.com have dug to bring the six(6) preparations that prove Ghanaians are ready to bid Ebony a befitting farewell on the said date.

READ THIS: Shatta Wale is just an empty barrel and a noisemaker – Ghanaians in Australia blasts Shatta Wale

1. Ebony’s Songs Get Massive Airplay
Since the death of Ebony Reigns, almost all the media houses including Radio and Television stations are playing her songs. It is an undeniable truth that the late Ebony’s songs are being played back to back on the airways. Songs like; Kupe, Poison, Sponsor, Maame Hwe and Aseda are enjoying massive air plays.

READ THIS TOO: Inspiring: Bisa Kdei Celebrates His Birthday With Deaf And Blind Students [Photos+Video]

2. The Launch Of Ebony’s Customized Funeral Cloth
This is a clear indication that Ghanaians are ready to mourn her as GTP has produced customized clothes for her funeral and burial. These customized clothes are named after her songs; ‘Maame Hwe’ comes in two types while ‘Aseda’ is black and white.

3. Upcoming Foundation For Her By Management
Ruff Town Records, management label of the late dancehall singer has revealed plans to launch a foundation in the memory of her with the purpose to educate drivers on the need for road safety and also to support accident victims.

READ ALSO: 10 Ghanaian celebs whose introduction into the entertainment industry “destroyed” the careers of others

4. Tribute song from MUSIGA
The Musicians Union of Ghana (MUSIGA) in collaboration with the Ministry of Tourism, Arts and Culture and the Ghana Music Rights Organisation (GHAMRO) to show their preparedness to mourn Ebony Reigns.

READ THIS: This Throwback Photo Of Bisa Kdei Will Motivate And Let You Know That All Isn’t Lost

5. Tribute Concert and Night Vigil
Number five (5) reason why Ghanaians are really prepared to mourn the ‘Maame Hwe’ hit-maker is the organization of a tribute and vigil concert. It’s going to be an all-night affair to honour Priscilla Opoku-Kwarteng.

READ MORE: Here are the 5 male Ghanaian celebrities whose divorces shocked everyone [Photos]

6. Last Respect To Ebony Reigns
Come Saturday, 24th March 2018, Ghanaians will have the last opportunity to pay their last homage and respect to Priscilla Opoku-Kwarteng a.k.a. Ebony Reigns.

7. Ghanaians craving for Ebony to win Artist of the Year
The 19th Vodafone Ghana Music Awards which comes off on 14th April at the Accra International Conference Center has nominated the late dancehall diva in the most prestigious category of the event, Artist of the Year. Ghanaians tipped the late Ebony to win that category before her untimely death but that doesn’t take the fact that she can win the award. Many have craved for the late dancehall diva to win the Artist of the Year to honour her for her influence in the music scene considering the year under review.