Unnecessary beef among artists is destroying the industry – Praye 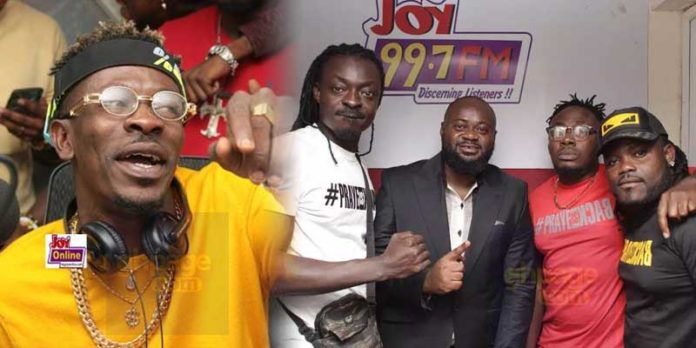 Choirmaster a.k.a Praye Honeho, a member of Ghanaian Hiplife music group Praye has revealed that all Ghanaian artists need to come together and find a way to push the Ghanaian music to the international level since constant beef among Ghanaian artists is one of the reasons why the music industry is lagging behind.

According to Eugene in an exclusive interview with Amansan Krakye on Radio Central, Nigerians music has taken over the Ghanaian music industry because of lack of unity.

“I don’t have time for beef. Beef doesn’t bring money. We can’t be beefing ourselves and blame the Nigerians for taking over our industry with their songs. The most important thing to do is to project Ghanaian music outside.

“We need to find a strategy that will make our songs to be heard in other countries not fighting ourselves. It’s about we put those beef aside because the upcoming ones are watching us. It will get to a time there be beef all over.”

Read this: Stonebwoy, Sarkodie and others need to respect me – Shatta Wale

“The veterans in the industry have to advise the new artists to stay away from beef. The fans shouldn’t support when one attacks so that there will be cleanness in the game,” he said.

Read more: Sarkodie begged me to produce him when he was hustling – Shatta Wale

According to the “U dey craze” hitmaker in a Twitter post, the winning formula of music duo R2bees is one that baffles him because they barely entangle themselves in issues concerning the industry nor involve themselves in any controversy or whatsoever, make a less public appearance but keep making hits and staying relevant.

Even in Sarkodie’s latest ”Advice” song, he said emphatically ”if social media is what is used to determine the relevance of an artist like Mugeez will never get a feature”, telling you how low key the duo record, release and live their life.

Read this too: Shatta revealed why he cried after proposing to Michy

One of the news which went viral all over social media in late May was the news of Queen Ciara, Obofuor’s wife’s...
Read more
Lifestyle