A Plus Lambasts Ameyaw Debrah And Goes Nasty On His Wife 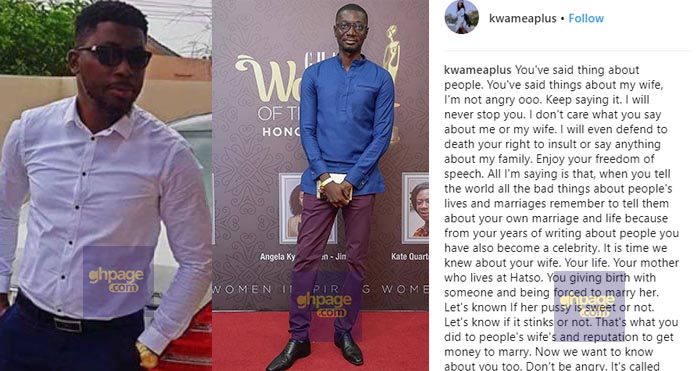 Outspoken Singer/Politician, A Plus born Obeng Asare Kwame has slammed renowned blogger, Ameyaw Kissi Debrah in a series of posts on his social media outlet.

The unfortunate outbursts stemmed from a post Ameyaw Debrah published on his website concerning the wife of A Plus, Akosua Vee. In the post, Ameyaw quizzed, discussed how Akosua Vee has toned her skin over the years.

Apparently, this didn’t augur well with A Plus but chose to let it fly by until two days ago when he referenced the blogger on TV for being in everyone’s business to make money off it on his blog but chooses to cover his flaws.

READ ALSO: Actress Juliet Ibrahim Breaks Up With Iceberg Slim, Deletes All His Photos From Her Social Media Account[Screenshot]

A Plus disclosed that Ameyaw Debrah hid the fire that caught the roof of the establishment he was having his lavish wedding to avoid ridicule yet just like any blogger in the country, he will publish that of others to earn income.

He also revealed that Ameyaw Debrah was forced to marry his wife after impregnating her but he has refused to clue his readers in on that.

Ameyaw Debrah responded to A Plus in a deleted post to clarify his claims and that birthed the insults A Plus rained on him thereby extending it to Ameyaw Debrah’s wife.

But A’Plus said it is ‘karma’, alleging that Ameyaw Debrah only married his wife after he impregnated her and was forced to marry her.

“Your entire life, tell me one thing you have done that earns you money apart from writing stories about people’s personal life and acting like you are a moral judge? This morning in one of your post about me, you asked that I leave you alone. Like seriously? Have you started taking tramadol or what? I should leave you alone?”

“When you made a post about my wife and latter went into her DM to appologise did I ask you to leave me alone? You guys in the media have serious issues but will always be out there talking about others to make money. If there was fire at my wedding you’ll be the first to post it to direct traffic to your site and social media platforms. But you hid yours because it was so embarrassing and you didn’t want anyone to know.”

“Have you asked yourself how painful what you write about people is? I’ve just said one or two things about you and it’s so painful that you want to be left alone but you were able to put a Photoshoped photo of my wife on your IG that she has bleached. You had the right to do that and you think that it was cool because you made money out of it. I will also say your wife has a very stinking pussy. I’m not even making money. Wo yere tw? kankan. Abiatoliwa. Deal with it ofui!!!!”

READ MORE: Check Out These Childhood Photos Of Stonebwoy’s Wife, Dr Louisa Which Is Setting The Internet On Fire

After few minutes of posting this, he said;

“You’ve said thing about people. You’ve said things about my wife, I’m not angry ooo. Keep saying it. I will never stop you. I don’t care what you say about me or my wife. I will even defend to death your right to insult or say anything about my family.”

“Enjoy your freedom of speech. All I’m saying is that, when you tell the world all the bad things about people’s lives and marriages remember to tell them about your own marriage and life because from your years of writing about people you have also become a celebrity. It is time we knew about your wife. Your life. Your mother who lives at Hatso. You giving birth with someone and being forced to marry her.”

“Let’s known If her pussy is sweet or not. Let’s know if it stinks or not. That’s what you did to people’s wife’s and reputation to get money to marry. Now we want to know about you too. Don’t be angry. It’s called karma…..”

READ ALSO: Leila Djansi’s Brain Is Small Like A Mosquito’s Clitoris – A Plus

“@ameyaw112 is that a ceiling fan you are wearing or shoe…. ????? Everyday you so called bloggers discuss people’s lives, dress, marriage even people k?ti size you discuss it just to drive traffic to your pages to make money but when there was fire at your wedding you kept it secret. This your opanka shoe too you are not saying anything about it. If Patapa wore this shoe like you’ll post it and make fun of him… see the way you pose like a disappointed wee smoker. Hahahahahahaha. Ofui!!!! #halfmanhalfbosom?”

@ameyaw112 is that a ceiling fan you are wearing or shoe…. ????? Everyday you so called bloggers discuss people's lives, dress, marriage even people k?ti size you discuss it just to drive traffic to your pages to make money but when there was fire at your wedding you kept it secret. This your opanka shoe too you are not saying anything about it. If Patapa wore this shoe like you'll post it and make fun of him… see the way you pose like a disappointed wee smoker. Hahahahahahaha. Ofui!!!! #halfmanhalfbosom?