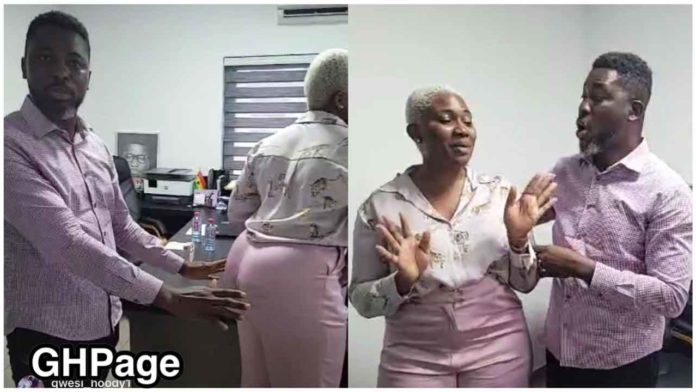 Media personality and mental health advocate, Nana Abena Korkor, has finally smoked the peace pipe with political activist, Kwame Asare Obeng aka A Plus, following their hot exchange on the internet a little over a week ago.

The two traded insults on social media after Abena went on a ranting spree to expose some dirty secrets of some top government officials in the country. In the course of doing that, Abena Korkor poked A Plus who also did not spare the opportunity to retaliate.

However, the two decided to lay down their weapons and embrace peace after the storm at sea calmed down.

On Wednesday, August 18, 2021, Abena Korkor paid a courtesy call on A Plus at his office in Accra to officially express her remorse and bury their hatchet.

In a video making the rounds, A Plus disclosed that Abena decided to meet him in person despite having apologised to him over the phone for the feud that ensued between them on social media.

A Plus also stressed that he had also rendered an apology to Abena for using some demeaning words towards her.

Among other things, the former TV3 presenter and plus-size model also accused A-Plus of being a snitch who should be trusted by people close to him.

This allegation did not sit well with A Plus who responded with a rather sharper dagger.

He also subjected Abena Korkor to body-shaming by describing her body size as a ‘provision store’ among other derogatory remarks.

According to A Plus, he did not understand why Abena Korkor seemingly hides behind her diagnosis with Bipolar Disorder to smear the reputation of people and make a U-turn with an apology after the harm had already been done.

For him, Abena Korkor is fully aware of what she is doing because she is getting money from her act just by pretending to be mad.

SEE THE VIDEO BELOW