Accra Flood: Husband of Korle-Bu doctor who was carried away recounts sad story 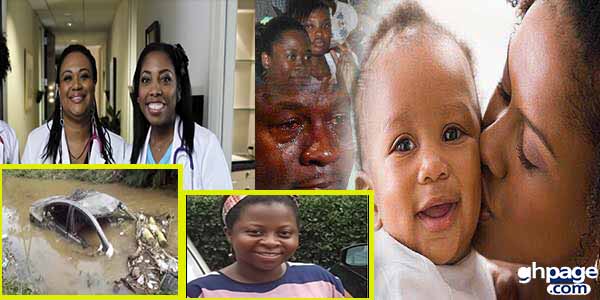 The husband Bernard Kofi Agyei Oppong has recounted how he watched his wife Dr. Aya Hayfron washed away at Teshie Rasta during the Accra floods.

According to him, his wife was trapped in her Hyundai Accent saloon car and all efforts to rescue her proved futile.

Speaking on Accra-based Adom FM on Tuesday, Mr. Oppong, said his wife was driving home from church around 10 pm together with two other passengers when the incident occurred.

He said the heavy floods swept away the vehicle after the missing doctor attempted to cross a bridge on a small river called Naa Pra.

The distraught husband said rescuers were unable to save the 32-year-old doctor but managed to save the two passengers who had been offered a lift by the deceased.

Mr. Oppong said they her car has been found in the river as rescuers hope to find her alive.

“I know my wife is waiting for me somewhere. I believe she is alive and probably in a hospital”, he bemoaned.

Mr. Oppong also revealed that they have a 6-month-old baby together and were hoping to enroll her in school to enable his wife to go back to work.

He continued they are still making an extra effort to rescue his wife and also appealed to the general public who may have any information on the missing doctor to contact the police.

However, the Teshie Police Commander, Superintendent Peter Yembilla had said together with the Ghana National Fire Service is still searching for the missing doctor and will not stop until they find her