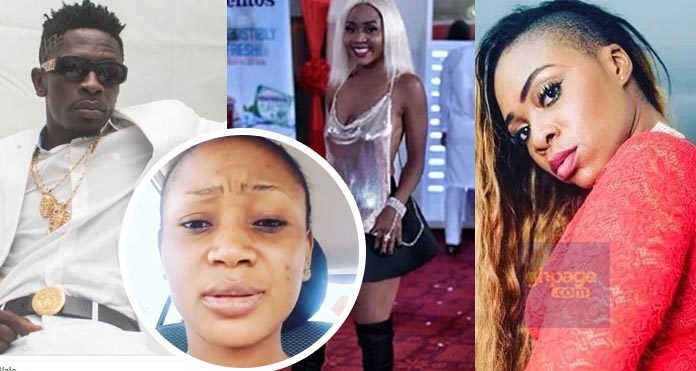 The young girl who was spotted bra-less and hot at the VGMAs was interviewed by Joy News and confirmed to the host that she also sleeps with big men in exchange for real properties and not just renting of apartments has once again come under public ridicule as she begs Shatta Michy to allow her ‘bang’ the dancehall artist.

In a self-recorded video, the actress admonished Shatta Michy to keep mute and stay with Shatta Wale because relationships are full of ups and downs.

This comes after the two[Shatta Wale and Michy] were engaged in social media fight.

Michy who seems not to understand why Shatta Wale would physically abuse her to the point of a break-up after their many years together wrote on Facebook that she could not pinpoint exactly what could make Shatta go wild on her because she has made many “sacrifices” for him.

READ ALSO: If I Have A ‘Sagging’ Br£ast And So What? Angry Rosemond Brown Fires At Critics For Mocking Her Over Her Flat B00bs

The actress captioned that video; “Michy watch your back”. She bragged that Shatta Wale is already in love with her and that Shatta Michy should leave for her [Rosemond Brown] to take over.

“Shatta Michy, you better keep quiet there. You say you suffer for Shatta Wale, what kind of suffering did you do for him? When you were with your previous boyfriend, did you stay when things got difficult? You left him without thinking twice and went to Shatta Wale.

“Now that Shatta Wale is tired, he wants to take bullet for me, Rosemond allow Shatta to do it. If you cannot handle Shatta Wale, please leave, and let me come and take over”.

“Every relationship is full of ups and downs, if he has beaten you, keep quiet and suffer, or else when you will leave, I will take over,” she added.

READ MORE: Break-up of the century – Shatta Wale and Shatta Michy are no more— They have allegedly broken up