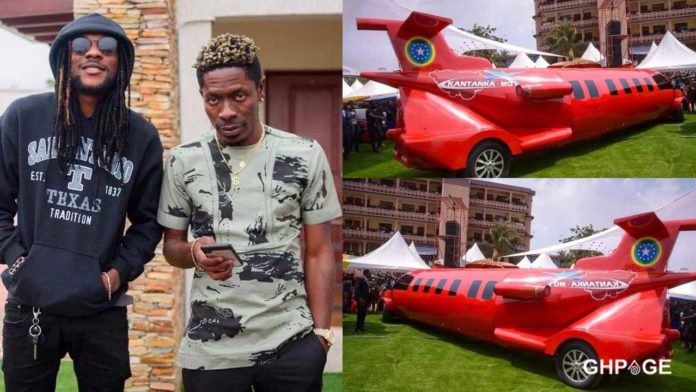 Social media for some hours now have been awash with photos of engineer Safo Kantanka’s new innovation a car that looks like an airplane.

Since the photos went viral, several social media users have shared their thoughts both good and bad about the new machine which has been given the name a caroplane.

Dancehall artiste Shatta Wale happens to be one of the few people who spoke ill about Kantanka’s caroplane.

According to Shatta Wale, Ing. Safo Kantanka has a lot of money but instead of him helping people, he is rather creating or inventing things that are not of benefit to any individual or the economy.

He posted: “Welcome to Ghana, where everybody thinks he or she knows how to do it well…please in the of Gods what the hell this..when people r hungry and you have excess of it , all u can do is this cartoons for who to sit inside…You hv to much money to spoil so it’s not shocking at all, I won’t even be shocked if you print the money urself cuz you hv the machines..How can government take me serious if u not serious about helping the economy but rathere doing Balloon pkanes..See rims like errhhhh hair dryer..”’

A few hours after his post, one member of his militants Addi Self also took to his social media page to clap back at Shatta Wale for his post.

According to him, if Safo Kantanka spends his money in building a ‘Caroplane’, it is his funds and business but not anything Ghanaian!

He posted: “SOMEBODY WORK GET EN MONEY BUILD EN CAROPLANDE DEN YOU PEOPLE VEX…NA YOUR MONEY?”