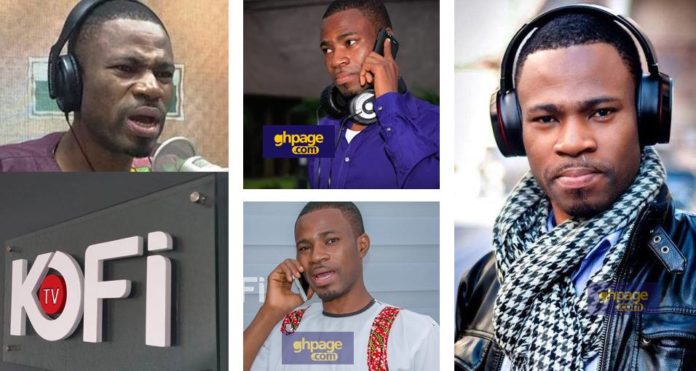 Popular Adom FM and Kofi TV presenter, Kofi Adomah Nwanwani resigned from the multimedia station on 1st December 2018 and it was a sad moment for workers of the media giants as well as fans and most Ghanaians who loved his style and line of work.

In a new video sighted by Ghpage.com, the popular newscaster and host of KoFI Tv on his last day at the studios of Adom FM noted how the company has become his family; from the owner to the last person it has been a good journey for over 10 years.

According to Kofi Adoma, it was a difficult decision for him but it’s in the right direction but what made him realized he was really departing with the media giants was when during a party held for him, people from all walks asked question s with almost tears in their eyes.

In the video, his news co-presenter, Obiri Yeboah Fentemfrem could be seen shedding tears as Kofi narrates his long journey and the good experiences he’s enjoyed at Multimedia.

Listeners who interacted with him advised him to think about it and have a change of mind because his journey with the media giants has been one of a kind which they are really going to miss.

Read this: Captain Smart calls his bosses “Fools” after they released a statement confirming his arrest

Though the popular Akan newscaster has on several occasions failed to reveal the reason for his sudden resignation, sources at Multimedia Group has informed GHPAGE.com that Kofi Adomah at a point was told to choose between his fast-growing Kofi TV (Youtube channel) brand and the multimedia group.

We were told Kofi Adomah’s work at Kofi TV at a point and as it could be seen denoted a conflict of interest —Where some of the stories or advertisement that could have been brought to Adom FM (multimedia) were channelled to Kofi TV. Read the full story here.