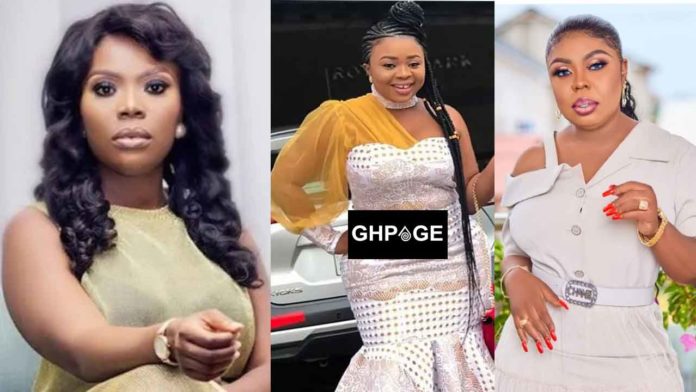 Afia Schwarzenegger and Deloris Frimpong Manso have been at loggerheads with each other for some years now and it seems there is no turning back.

The two media personalities have been throwing jabs at each other since their friendship went south.

Recently, the two have rekindled their long-standing beef after NPP’s Chairman Wontumi hired Delay to host a show on his Accra-based radio station over Afia Schwar.

Afia Schwarzenegger, who felt disrespected, took it upon herself to campaign for Chairman Wontumi’s opponent in the just ended NPP primaries.

However, Chairman Wontumi was re-elected and since then, Afia Schwar has been throwing subliminal shots at Delay and Wontumi.

Well, loud-mouthed actress, Adu Safowaah has thrown her support behind Afia Schwar in her fight against Delay.

In a post on social media, Adu Safowaa indicated that Delay started the fight and that she deserves every insult hurled at her.

She further stated that Afia Schwar is more successful than Delay and has been able to deceive Ghanaians with her calmness.

This comes after Afia Schwarzenegger described Delay as a barren old woman and a failure in life.