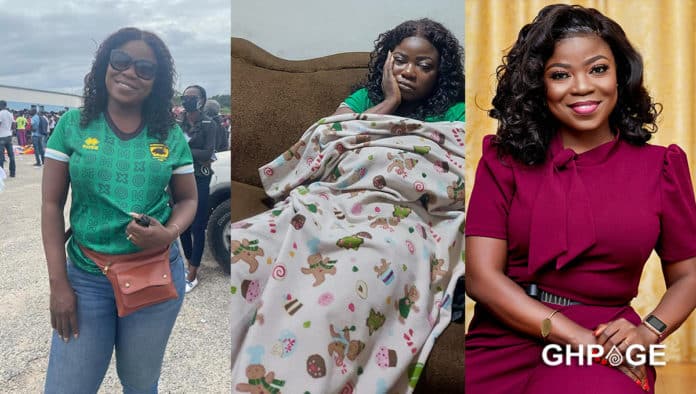 Prior to the highly-anticipated match in the 2020/2021 Ghana Premier League, the media personality was pictured at the stadium donning a Kotoko FC jersey and promoting the club on her social media handles.

In fact, Vim Lady, as she is fondly called, was very much enthusiastic her side would beat their arch-rivals at the Accra Sports Stadium in the crunch game but sadly, it ended in tears for them.

“I’m going home. I’m sick,” she wrote on Facebook after the match adding, “Hearts of oak, thanks for a good game but fire go burn you for the mallam goal. Ahhhh! Broken heart ben ni.”

A few hours later, she shared a picture of herself under a blanket on social media and revealed that she has been knocked down by “headache and body pains”.

A frail-looking Afia Pokuaa, in the caption said: “My nephew took this picture of me a couple of hours ago at grandma’s house. My mum is giving me concoctions so I’m getting better. I’m really feeling cold???. I have headache and body pains.”