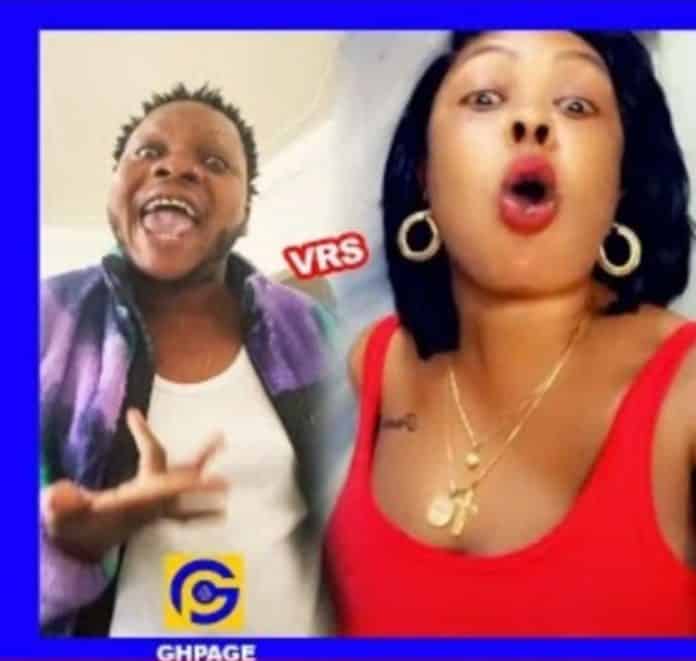 Afia Schwar’s long-standing beef with Nana Tornado has taken a different twist after the latter accused the former of snitching on Tracey Boakye and her husband.

Just about 5 days ago, Nana Tornado accused Afia Schwar of spreading lies in the media that Tracey Boakye’s husband, Mr Frank Ntiamoah is a broke makeup artist in Germany.

Nana Tornado continued that Afia Schwar is a bad friend therefore Tracey Boakye should exit their friendship before the obvious happens after pouring heavy insults on the comedienne.

Afia Schwar has finally reacted to Nana Tornado’s accusations in a thunderstorm manner by dragging his innocent mother into the whole feud.

According to Afia Schwar, Nana Tornado’s mother is a serial prostitute who sells her body in order to survive.

The comedienne proceeded to allege that Nana Tornado’s mother receives 21.5 kg bag of rice from her customers after they are done chopping her.

She later dared Nana Tornado to show the face of his child to the world if he’s the man he claims to be.

Before Tracey Boakye’s expensive and colourful traditional and white wedding ceremony followed by a lavish dinner which attracted several celebrities, Nana Tornado and Afia Schwar threw subtle shots at each other through shared posts and videos on their social media platforms.

The aftermath of the wedding has been nasty and disgusting because Afia Schwar and Nana Tornado have both refused to allow sleeping dogs to lie.

In a new self-made video from the camp of Nana Tornado that has caused a stir on the internet – He accused Afia Schwar of lying to people around her that Tracey Boakye’s husband is a broke make-up artist in Germany. READ MORE HERE