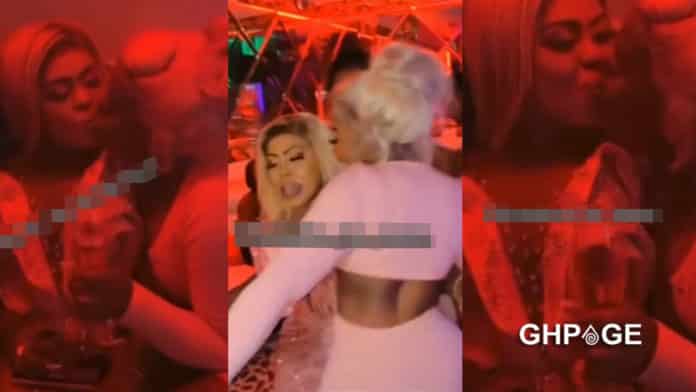 The vociferous media personality and sultry socialite had on Friday attended Tracey and her husband’s wedding reception inside Golden Tulip Hotel in Kumasi.

But in what looks like a deliberate attempt to make news headlines, the two decided to pull a stunt to sway attention from the couple to themselves.

A video sighted by GHPage on social media shows the moment Afia and Shuga were captured conspicuously making out in public.

The two kissed each other as though they were lovers who could not control their libido till they return home before getting naked.

Though the event was strictly by invitation, it still managed to pull a lot of people who joined the couple to celebrate their marriage.

The star-studded night saw the likes of Asamoah Gyan, Asantewaa, Becca and actors from the Kumawood industry in attendance.

Diamond Appiah of the trio “Mafia gang” was also present to support her best friend and partner in crime who had been taken off the single’s market.

Watch highlights from the wedding reception below:

Meanwhile, Shugatiti is reported to have been denied entry into the premises of Tracey Boakye’s reception over her supposed “inapporiate” outfit for the event.

She is reported to have been bounced by guards manning the gate over a revealing attire she donned for the occasion. But viral videos show Shugatiti who is noted for her skimpy clothing appearing even more presentable than we’ve ever seen her.

The highly anticipated so-called ‘wedding of the year’ which did not come any closer to our expectations is finally over.

Just like Afia sponsored her wedding to Abrokwa, and financially took charge of their home thereafter but got dumped, some netizens have predicted the same thing will happen to Tracey by her broke husband who lives in Germany.