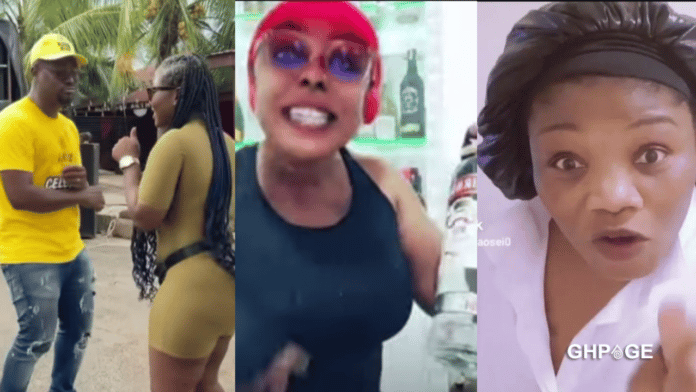 Comedienne and media personality Afia Schwarzenegger has savagely descended on Maa Linda once again and this time around, she still insists Abeiku Santana has slept with Felicia Osei.

Just about two days ago, Afia Schwar resurrected her long-standing beef with Maa Linda after she accused the Ghanaian-born UK-based socialite of orchestrating for one of her adopted daughters to be sent back to her parents.

While ranting on the internet about Maa Linda’s loathe for her, she boldly stated that Maa Linda’s daughter Felicia Osei once had an amorous relationship with ace radio presenter Abeiku Santana.

After Afia Schwar’s scathy attack on Maa Linda, the latter has dropped another video to plead with the former for peace to reign.

In Maa Linda’s appeal, she begged Afia Schwar to cease fire because they are both mothers to adults.

She also warned Afia Schwar never to insult or admonish her again because they are old women and hence should act their age for once.

Afia Schwar has reacted to Maa Linda’s bargain for peace and according to her, she will end their fight neither today nor tomorrow because she’s hell bent on destroying her.

In her rebuttal, she dared Maa Linda to deny the known fact that she is the one who first blew the cover that Abeiku Santana has slept with her daughter.

She also revealed in the video that she has ended her 12-year-old beef with Bishop Obinim and from today, she will direct all her attention to Maa Linda and her pathetic children.