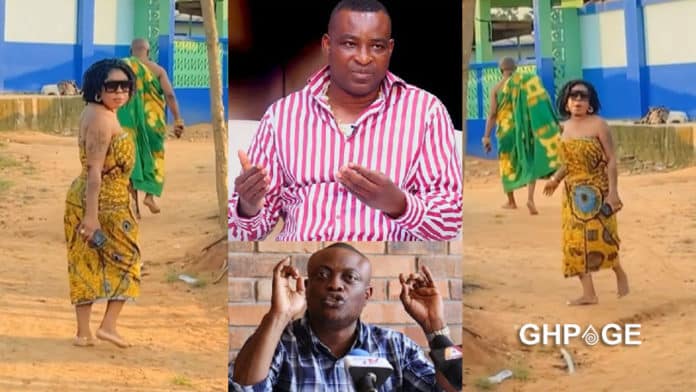 Afia Schwarzenegger is bent on proving to Ghanaians that she’s innocent of all the allegations made by lawyer Maurice Ampaw in defence of Chairman Wontumi.

After she was accused of sleeping with dogs, the comedienne shared a video of herself with eggs and a bottle of Schnapp invoking generational curses on them.

She has even gone to extent of visiting three shrines Nogokpo, Agbozume and Klikor and spent over Ghc 6,000 to step up her voodoo.

The whole drama has created tension on social media with many people expressing concern about the implication of her utterances.

However, a woman claiming to have inside knowledge of how the Nogokpo shrine operates says Afia Schwar’s curses would not work.

According to the lady in an audio recording, summoning someone at Nogokpo isn’t a guarantee something will happen to them. She explained that the gods will first hold a spiritual trial with the spirits of Afia and Wontumi to determine who is at fault.

During the spiritual trial, Wontumi will have a chance to explain himself and respond to the allegations against him before the judgement is finally passed.

The supposed insider suggested it’s unlikely Afia would not get the desired results she wants after the trial because Wontumi has been good to her.

According to her, Afia’s adventure is useless as the people at the Nogokpo shrine don’t condone ingratitude from people who come to them.