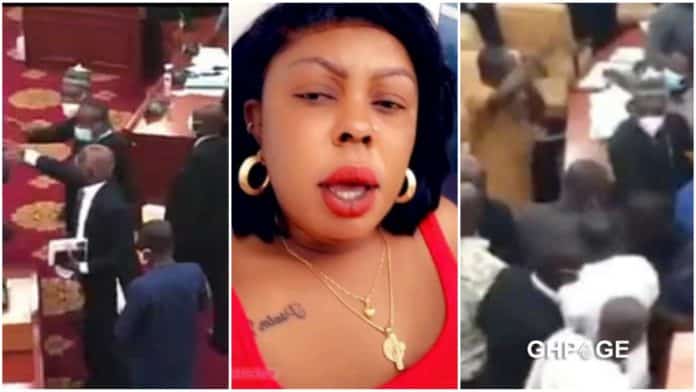 Loudmouth Afia Schwar has dropped her two cents over the recent scuffle in parliament between NPP and legislators during the e-levy debate and voting.

The highly opinionated socialite has sarcastically slammed our so-called “Honourables” who refused to behave honorablyy in parliament hence resorted to the exchange of blows and slaps to settle the scores between them.

According to Afia Schwar in her grimly mocking post, we should clap for our parliamentarians because they fought for the betterment of Ghana.

She shared the below sentiment on her IG page;

“They are fighting for us ? ? ? ? and we should be grateful !!!!!!
Congratulations ‘Honourable ‘ members of Parliament.“

A fight ensued in parliament a few hours ago when the MPs were voting in a headcount to decide whether the E-levy bill should be accepted under a certificate of urgency.

The Minority had attempted to stop the First Deputy Speaker, Joseph Osei Owusu, who was presiding over the House, from leaving his seat and participating in the voting process.

This infuriated the Majority MP, who met them at the Speaker’s table to challenge the NDC MPs.

READ ALSO: Fight breaks out in parliament over the E-levy between minority and majority

The Minority MPs explained that Mr. Osei Oswusu, while in the position of Speaker, does not have a casting vote.