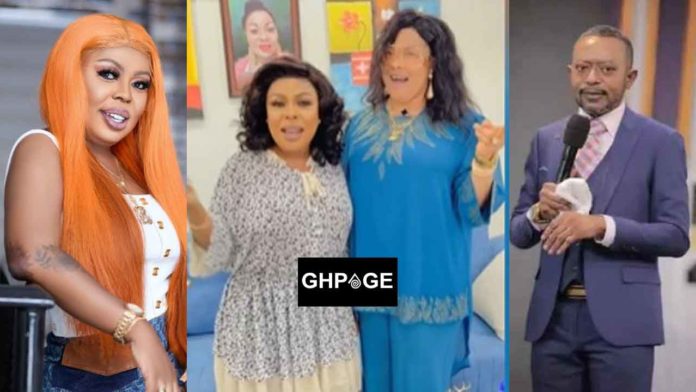 Afia Schwarzenegger has stayed true to her words as she has paid a courtesy call on Evangelist Patricia Asiedu formerly known as Nana Agradaa in regards to her squabble with Rev. Owusu Bempah.

In a video that has been widely circulated, Afia Schwarzenegger and Evangelist Patricia were seen laughing heartily with each other.

According to the video, the two controversial personalities made it clear that the issue has been sorted out.

Earlier on, Afia Schwarzenegger revealed that she would visit the repented fetish priestess for an out-of-court settlement about Owusu Bempah’s case.

This comes after the founder and leader of Glorious Word Power Ministries International, Rev Owusu Bempah stormed Nana Agradaa’s house with his ‘thugs’ to threaten her.

The man of God and his three junior pastors were later arrested for issuing threats, brandishing weapons, and assaulting police officers.

The accused persons were arraigned before the court and charged with offensive conduct conducive to the breach of peace and threat of death.

They were however denied bail and remanded in police custody to reappear before the court on 20th September 2021.