Afia Schwar is a witch, popular NPP man will die before 2024 elections 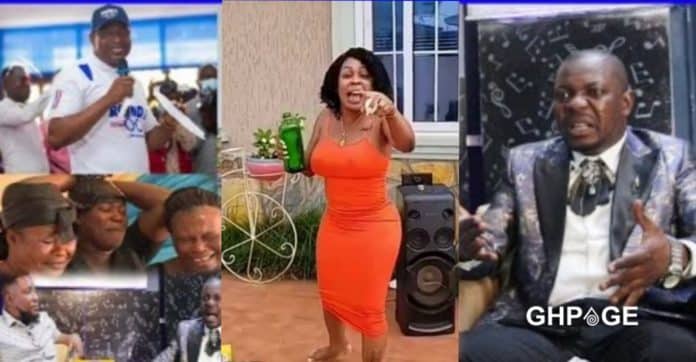 Afia Schwar’s infamous curse on Chairman Wontumi has opened a can of worms and it’s getting nastier day-in-day-out.

Afia Schwar who cursed Chairman Wontumi and Lawyer Maurice Ampaw about a week ago hasn’t reversed her curse yet and it appears she will never do that.

Amidst the brouhaha, a lot of recognised national celebrities have shared their two cents on the issue with contrasting views.

Rev Opambour who is a close friend of Afia Schwar shared his views on the matter and according to him, Afia Schwar and Chairman Wontumi’s case is senseless and defies common sense because they are two adult people hence they should solve their feud behind closed doors.

According to Spiritual Father, Afia Schwar is a witch therefore Chairman Wontumi should be very careful about the curse she rained on him.

In the course of the interview, Spiritual Father additionally stated that a very prominent NPP bigwig will die before 2024 elections.

Spiritual Father didn’t literally mention Chairman Wontumi’s name but it appears the Ashanti Regional NPP chairman is the one he was talking about.

Afia Schwar has cursed more than 20 people in the entertainment industry and none of them have worked so far.

We don’t know if this her fresh curse on Chairman Wontumi will work or not. Time will tell.