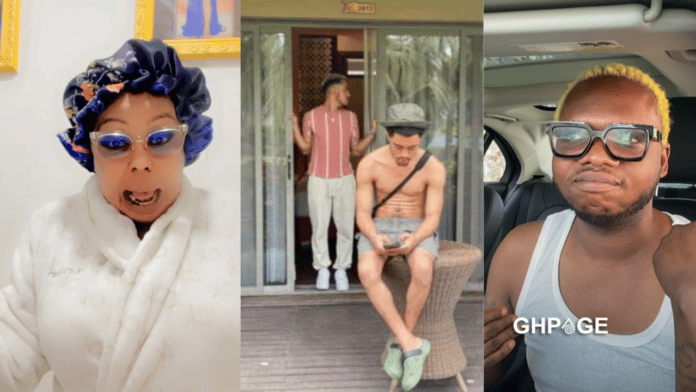 Afia Schwar’s son, James Heerdegen has finally reacted to the disturbing allegations pelted at him that suggest that he’s a big-time gay guy.

The rumours that James Heerdegen is gay have been lingering on the internet for some time now and Nana Tornado is the mastermind behind this accusation.

About 5 months ago, Nana Tornado threatened to drop the bedroom video of James and his gay partner after Afia Schwar insulted him for defending Delay.

Just last week also, Nana Tornado brought up the gay conversation once again after he wished James a cryptic birthday message on his IG page.

This contentious birthday message from Nana Tornado to James triggered Afia Schwar to go haywire on the internet.

The mother of two shared a video of herself on her socials to mercilessly insult Nana Tornado. She also accused her former bestie of being the gay he claims her son is.

As we all know, Afia Schwar’s twin sons try their possible best to stay out of public drama and their mother’s never-ending beefs with other industry persons.

During a Q & A session with his followers on IG, James revealed that all the accusations that he’s gay don’t get to him or mentally break him down because he knows they’re not true.

He sounded very unworried about the whole brouhaha that has obviously dented his reputation looking at how Ghanaians dislike homosexuals.

Since Maame Ngege and Nana Tornado claim to have the bedroom video of James and his gay partner, we are anxiously waiting for them to bravely share the video on the internet.

Maybe, there’s no such video because if there was anything like that, the video would have been circulating on the internet by now citing the number of enemies Afia Schwar has in the media space.