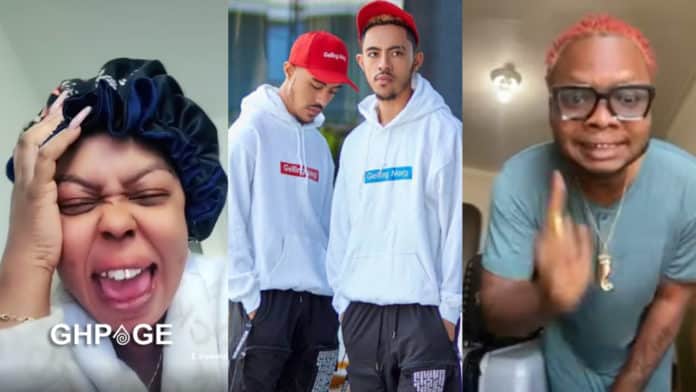 Nana Tornado has exposed yet another dirty secret about one of the twin sons of Ghanaian loudmouth actress and media personality Afia Schwarzenegger.

According to him, John Irvin Heerdegen Geiling impregnated a woman but failed to claim responsibility for the pregnancy. He eventually dumped the lady in question and moved on with his life as though nothing had happened.

Tornado had earlier alleged that John’s brother James Ian, is gay and his partner is one young man whose name has been given as Richie.

This new claim comes in the wake of a fresh video that gives an account of the moment Afia Schwar was denied entry into a plane at the Schiphol airport in Amsterdam in the Netherlands because she was overly drunk.

Afia Schwar was detained by the cabin crew and airport officials who prevented her from entering the aircraft before take-off.

Per the video available to GHPage, Afia Schwar tried to talk the officials into allowing her entry into the plane but that proved futile.

As a result, Afia Schwar’s arch-rival Tornado took to social media to mock and drag her through the mud.

In his response to the video, he said the embarrassment Afia Schwar suffered was a testament to the fact that she was always up to something corny and her life was not a true reflection of whom she actually was.