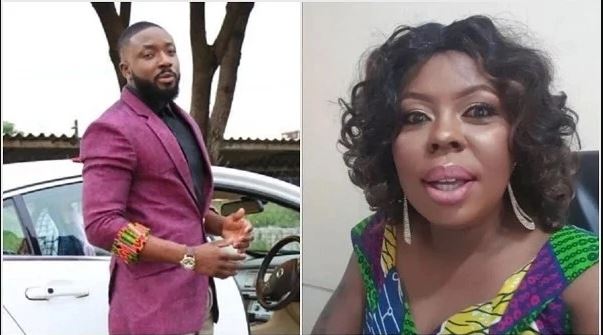 Television personality, Valentina Agyeiwaa better known as Afia Schwarzenegger who has come under fire after her saga with her estranged husband Abrokwah has turned her attention and takes the fight to the Big Brother Africa star Elikem Kumodzie, describing him as a crazy ‘ashawo boy’

Elikem the tailor in a latest social media post that appears to be consoling the beleaguered comedienne has received a reply that he never expected.

READ ALSO:VIDEO: We are Madly In Love So Get Ready For My Wedding With Vivian- Yaw Dabo

Elikem in an Instagram post said that even though the controversial TV host mocked at him when his alleged affair with Odartey Lamptey’s wife surfaced but he will rather encourage her.

“I wanted to laugh at you at first but stop. Hold on, no man on this earth no matter what, should do what your husband did, he had no right to put you out like that, he’s getting all the shame and blame now, nkwasiasem paa, looking like he’s trying to cover up things and is looking for a way out, who hasn’t done what before, everyone’s got a skeleton hidden somewhere or something they’ve done in the past.” Elikem posted on his page.

But Afia in a swift reply to the post rubbished Elikem in a rather bizarre manner.;

“You crazy Ashawo boy…leave me alone before I pour acid on you”. Afia harshly replied Elikem.

The outspoken entertainer has come under heavy fire after her nude video went viral sparking outraged at various homes.

Photos and video of Afia Schwarzenegger have set various social media platforms on fire after her husband caught her with another man in bed.

READ ALSO:Afia Schwar reacts to her [email protected] Video&Photos~Says her ex-hubby was after her money

As many critics mock her in equal measure, others also show support for the actress calling on the police to arrest her husband, Lawrence Abrokwa