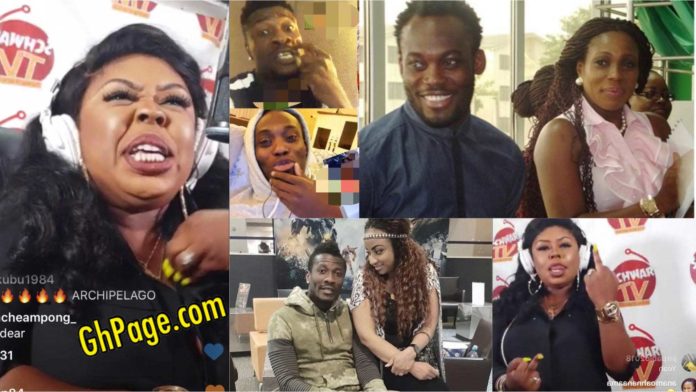 Former Black star teammates Michael Essien and Asamoah Gyan have become the latest victims to experience the ugly side of controversial media personality Afia Schwarzenegger after they mock her and other celebrities in a live video chat.

American rapper Cardi B’s meet and greet turned sour after the Ghanaian celebrities got made and left the venue because they felt disrespected after waiting for a long time only for them to know that the rapper was sitting by the pool chewing ‘chichinga’.

After the news of Cardi B snubbing the celebrities went viral, so many people on took to social media to mock the celebrities which included Afia Schwarzenegger, Efia Odo, Akuapem Poloo, Moesha Boduong, and others.

General captain for the black stars Asamoah Gyan also jumped unto social media and called his friend Micheal Essien so they discuss what happened in a live video but they both ended up trolling the celebs an act that didn’t sit well with some celebs.

Well, Afia Schwar has replied to Michael Essien and Asamoah Gyan concerning some comments they made in their Live Video call on Instagram.

Afia on Schwar Fm ordered her Director to google for the meaning of the word, “Celebrity” so she could read it loud and clear to the Public.

She concluded that Micheal Essien and Asamoah Gyan never stepped their feet in a classroom and that has got them making comments like, “There are no celebrities in Ghana”.

She explained that the fact that her stardom does not match up to Beyoncé’s stardom doesn’t disqualify her to be a Celebrity.

She furthered that if that is the Principle for such analyses then she also concludes that Micheal Essien and Asamoah Gyan are neither Celebrities because they do not match up to Messi or Kaka.