Louth mouth comedienne and presenter Afia Schwarzenegger sends fresh attacks to multimedia notably Prince Tsegah and their boss Kwasi Twum for granting an interview to her ex, Prince Williams to denigrate her 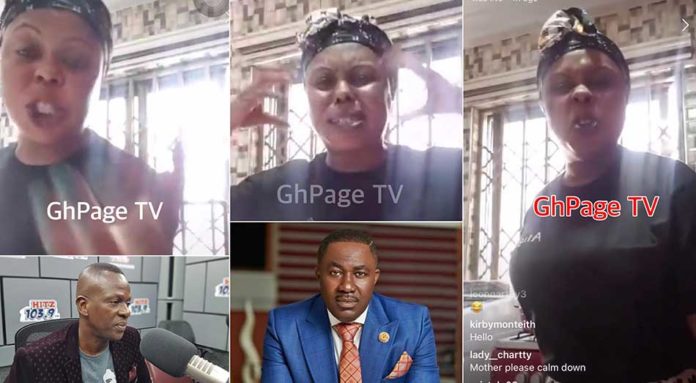 Controversial and outspoken Tv personality and comedian Afia Schwarzenegger has launched fresh attacks on Multimedia for granting an interview to her ex, Prince Williams.

According to Afia, the purpose of the interview was to tarnish her reputation and also disrespect Osei Kwame Despite, CEO of Despite Group of Companies.

The ex-boyfriend of Afia Schwarzenegger, Prince Williams was interviewed on Asempa Fm by Prince Tsegah and he made some interesting allegations against her.

According to him, he always used a condom whenever he had sex with Afia because he was scared of contracting HIV-AIDS as such allegations were made by Hon Kennedy Agyapong.

ALSO READ: I used condom whenever I slept with Afia Schwar for fear of AIDS -Ex

He also stated that the self-acclaimed comedy queen once told him that the CEO of Despite Group of Companies is an occultist.

Prince also revealed that Afia told him Abeiku Aggrey Santana, a media personality at Despite Group of Companies killed his daughter for rituals.

However, Afia has denied all these allegations levelled against her and stated that all these was a ploy to tarnish the image of the CEO.

These allegations infuriated Afia and launched a series of attacks on Multimedia notably Prince Tsegah and Chief Executive Officer of Multimedia, Kwasi Twum.

She described Multimedia as fools and that their agenda was to disrespect Osei Kwame Despite because he is a huge competition.

“I will not lower my standards to grant you an interview. I worked with Hitz Fm for a year and was never paid. You paid that guy to come to your station and say all these lies against Kwame Despite.

Where is your evidence concerning the allegations you made against Abeiku Santana? Prince Williams is autistic and you allowed him on your show to show such disrespect. God will punish you”, she angrily stated.