Revealed: Afia Schwarzenegger mentions the two married men Berla Mundi is dating and One is a known politician 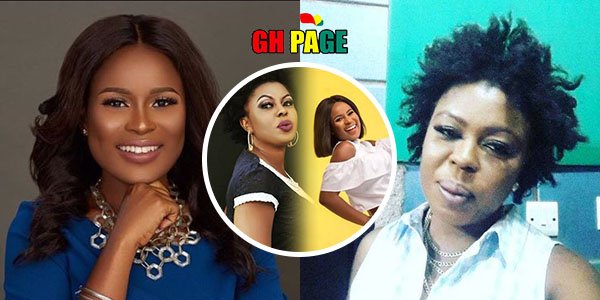 Self-styled Queen of Ghana comedy, Valentina Nana Agyeiwaa, popularly known in showbiz as Afia Schwarzenegger, in a vile attack has called out on-screen vixen Berla Mundi a husband snatcher who has snatched not just one but two married men.

The popular TV icon took to her Instagram page to reveal that Berla Mundi is dating two married men —For one he knows the name as Mr. Adams, a politician.

Furious Afia Schwarzennger took to her Instagram page to react to Berla Mundi’s “Late Afternoon Show” program which was aired prior to the end of 2017 on GHONE TV where Berla Mundi and MzGee of Hitz Fm discussed Afia’s marriage scandal.

The panelist especially MzGee stated that irrespective of the fact that Afia was unfairly treated by the husband, Ghanaians did not sympathize with her because her character stinks.

No nonsense Afia Schwar went ahead to mention one married man, Mr.Adams as one man Berla Mundi is sleeping with.

She added that the Mr.Adams is a renown Ghanaian politician and as far Ghpage.com knows, Mr. Kofi Adams, Organizer of the National Democratic Congress is the only renown politician in Ghana we can easily identify and he is married. Could it be him?

BELOW IS WHAT AFIA SCHWARZENEGGER POSTED;

“Dear people with good character sleeping with people’s husbandssss ..
My bad character doesn’t extend to someone’s matrimonial home;my bad character doesn’t extend to sleeping with peope’ls husband for job nor doing make up at @nancyblaq on credit,i don’t rent clothes to slay either..
Its a pity that things like these can open their mouth to talk about character… Becos some of us due to the respect we have for some people has chosen to be silent on things…
Madam Character…may be the host of the Character show didnt tell you that she is blackmailing someones husband for her job and becos the husband is a friend to the boss they kept her..
Madam good character tell your host we know her relationship with Mr Adams who is also married n a politician..making it already 2 married men.
Yes,my character is “not to take nonesense from nitwits” like thee and heaven n earth will bare me witness it s better than warming the beds of married man…atleast i married,yours is just Ashawo to rent clothes for social media likes…So Sit ur fucking turkey clothes ass down n be humble…cos your characters are disgusting to say the least…we see all of you all the time but u see ur Ashawo business is none of my business!!!
Character my ass…How dare u talk about marriage when even ur dog has refused to propose to you…foolish girls,how dare u…foolish ambassadors of abortion.
How dare u talk about relationship aboa when every thing that have sex with you denies you…And when u want to talk about me pls wear better clothes…yall look like slaves
Dont dare me cos i have ur list”