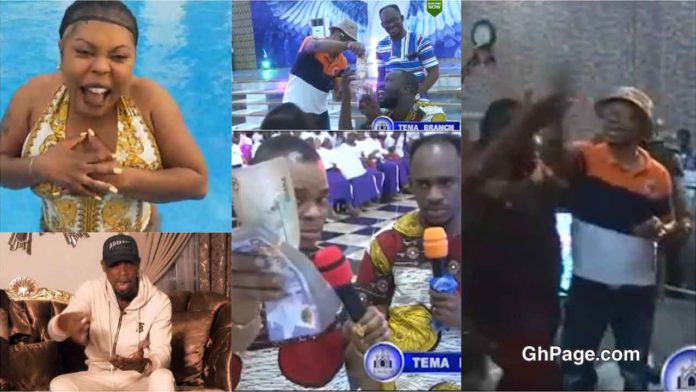 In a video sighted by Ghpage.com, Afia Schwarzenegger claimed the founder and leader of International Gods Way Church, Angel Obinim has lost the battle.

Afia Schwarzenegger made fun of Angel Obinim after Rev Obofour claimed that he borrowed the first Range Rover he (Obinim) used in 2014.

The self-acclaimed queen of comedy sarcastically pleaded with Rev Obofour to have mercy on Angel Obinim because he has ended his (Obinim) career.

According to Afia Schwarzenegger, Rev Obofour has placed an idiot (Angel Obinim) in his place.

“Rev Obofour, I am pleading on behalf of Angel Obinim. You have won the battle, you have ended Angel Obinim’s career. I will start attending your church because you can put an idiot in his place”, Afia Schwarzenegger said amidst laughter.

In reacting to Afia Schwarzenegger’s mockery and Rev Obofour claims, Angel Obinim gave out 1000 cedis to two of his junior pastors and also sprayed money on his congregation.

Obinim also gave out 4000 cedis to a church member to cater for her rent and also promised to help her spiritually.

He did to kind gesture to prove that indeed he is the richest pastor in Ghana.

It can be recalled that the General Overseer of Anointed Palace Chapel, Rev Obofour recently replied to Angel Obinim’s warning where he exposed deep secrets about him.

Rev Obofour claimed Angel Obinim is a poor man who only brags about his wealth and that his wealth cannot be compared to his.

He also disclosed that Angel Obinim faked his arrest just to gain hype and attention.