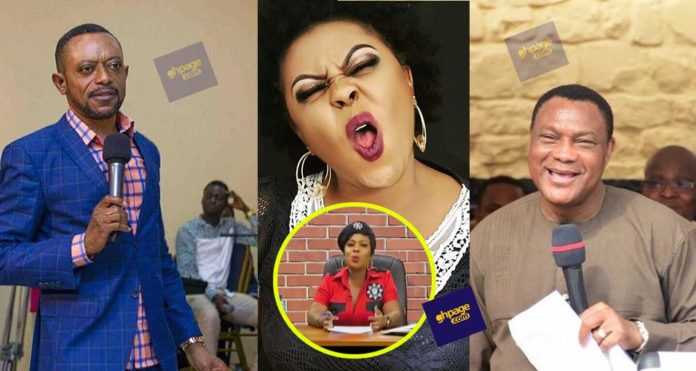 Comedienne Afia Schwarzenegger has waded into the ongoing brouhaha between Sam Korankye and Prophet Owusu Bempah.

According to Afia Schwar, Sam Korankye’s claim of fake prophets bleaching their faces can be true daring because Owusu Bempah has been challenged by Sam Korankye Ankrah to release one of his throwback photos to prove he[Sam Korankye] is a liar over claims that he’s a fake prophet.

This is not the first time Reverend Sam Korankye Ankrah, the Apostle General of Royal House Chapel has been in a near fist fight with supposed fake men of God.

Rev. Sam Korankye Ankrah as part of his teachings described that most fake prophets in Ghana have bleached faces and their prophecies are simply projections which simply put fear in people and give false hope and described their church members as foolish people.

The much-revered man of God said to his church members:

Read this: “Kidi will suffer terribly for his ‘Thunder’ song” – Kumchacha curses

“Although I have never been to their churches, I hear them on radio and if you look carefully, you can easily spot them. I hear them on the radio and see them on TV I will tell you a few characteristics of fake prophets”

“Secondly, their so-called prophecies and miracles are simply projections rather than divine revelations given them by God.”

Meanwhile, the founder and leader of Glorious Word Ministry, Reverend Owusu Bempah who did not take Sam Koorankye’s words lightly launched series of attacks on the Apostle General for labelling some prophets in Ghana as fake prophets including him.

According to Owusu Bempah, the Sam Korankye Ankrah he knows today is far different from the one he met years ago and invited to preach at his church.

Read this too: Owusu Bempah ‘Arrested’ For Threatening To ‘Kill’ A Man Of God

Barely 48 hours after Reverend Owusu Bempah accused Apostle General Sam Korankye Ankrah of taking pills to bleach and daring him to share his ten-year-old photos, throwback photos of Sam Korankye as far back as 30 years popped up on social media to prove he’s been fair from olden days, challenging Owusu Bempah to bring out his old pictures to deny his claim that he’s bleached.