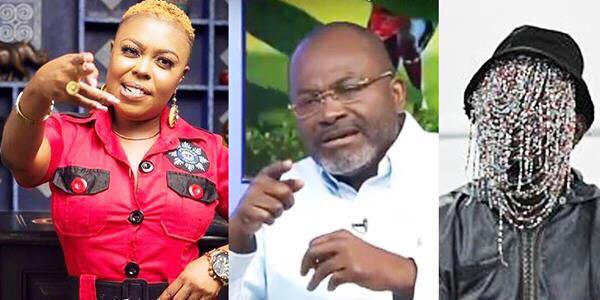 Many have described the Honorable’s attacks on Anas as Out of sheer desperation to frustrate the ace investigative journalists Anas Aremeyaw Anas and his Tiger Eye PI team from premiering their latest expose, dubbed, “Number 12”.

What issue will come to Ghana that Afia Schwarzenneger won’t have a say?

The TV presenter on her show on TV Africa dubbed political police referred the Hon MP as a liar. According to Afia, Ken lied about the things he claimed to have known about her when they had their fight.

“You know Ken to be doing investigations but a lot of his investigations are factless. I am saying this on TV. All the things Ken said about me were lies.” Afia Schwarzenegger stated.

“He said my children are Tokais but are from German. He said I stay at Tantra Hill but I have never stayed there, it’s my dad who stays there- I stay at Haatso. His ‘fact findings’ are fake.” Afia Schwarzenegger added

“Was Kennedy Agyapong able to ask Anas, what he does for a living to acquire his wealth? Is it not the same thing I asked him in 2016 at my former station that I got into a problem? We all know Kennedy Agypong has money… but the property he possesses doesn’t correspond with the kind of money he has.”

In a related development, Late JB’s wife, Ivy responds to Kennedy Agyapong over her alleged Relationship with Anas.