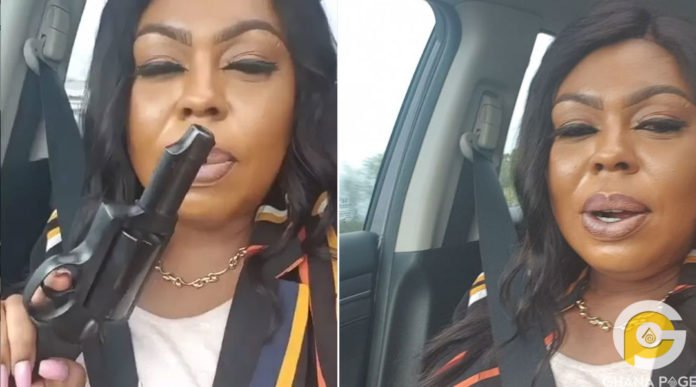 Contentious TV personality and comedienne, Afia Schwarzenegger seems to have acquired a gun to protect her from her numerous “haters”.

In a video posted to Afia’s Instagram page, she is seen introducing her gun which she named Barbara, and threatens not to spare anyone who messes with her.

According to her, the gun is a gift she received from her husband-to-be.

“Barbara can take your life, don’t mess with me..I’m legal to kill and I will not spare you”, she said as she waved the gun to and fro.

Afia Schwar’s relentless attacks against certain men of God has not died out.

She recently accused Prophet Nigel Gaisie of sleeping with several ladies in his church and sometimes abusing them.

According to her, the ladies personally informed her of their ordeals.

She also revealed that Prophet Gaisie had on several occasions abused his wife.

Prophet Nigel Gaisie is known to have predicted the death of the late Dancehall artiste, Ebony Reigns.