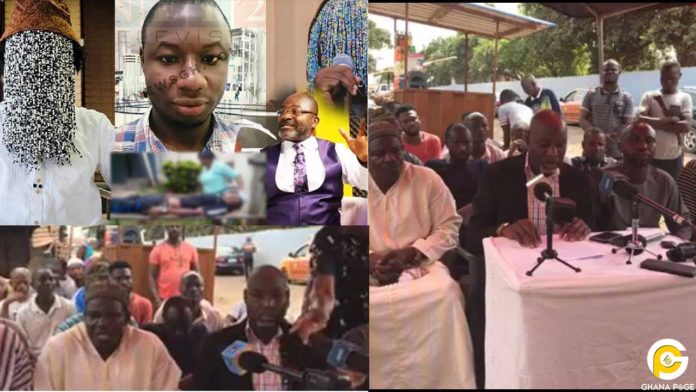 The family of the late Ahmed Hussein-Suale who was murdered by unknown gunmen on 16th January 2019 has held a press conference concerning the recent outburst of Honourable Kennedy Agyapong over the death of the Investigative Journalist.

According to the family, this is just a diversionary tactic by Kennedy Agyapong to shift attention from him.

“It has come to the notice of the family through some media platforms of a shameful claim by Mr Kennedy Agyapong to have ever met our late son, Ahmed Hussein-Suale.

This is a falsehood and preemptive act at procrastinating the resolution of the issue surrounding the murder of our son and to disrupt the painstaking efforts of well-meaning individuals, countries and security agencies in Ghana from getting to the bottom of the matter through diversionary tactics.

We are confident and hopeful that the thunder spirit worldwide and the innocent soul of our son will soon haunt out those whose hands are dripping with his blood.

It is further insinuated that the Member of Parliament for Assin Central publicly claimed that he assisted with the payment of the school fees of our son in the year 2012. This assertion is nothing but the desperation of an overly excited person over the demise of our son and the exploitation of the perpetual silence of the dead”, the family disclosed.

The family also refuted claims that Ahmed was at loggerheads with Anas Aremeyaw Anas and was no longer a staff of Tiger Eye PI until his demise.

“He further claimed our son was no longer a staff of Tiger Eye PI and that Ahmed and Anas were not on talking terms prior to his demise.

How could individuals at loggerheads jointly secure visas to travel out of Ghanaian jurisdiction for an assignment which was due in the first week of the month of February 2019″, they added.

They also disclosed that on the day of the unfortunate incident, Ahmed was with Anas throughout and had even informed some family members about collaboration between Tiger Eye and the Attorney General Office to prosecute those implicated in the Number 12 expose.