Video: This Is My First Ever CAF Awards Ceremony I have Attended- Akufo Addo Commends CAF For Hosting The Event In Ghana 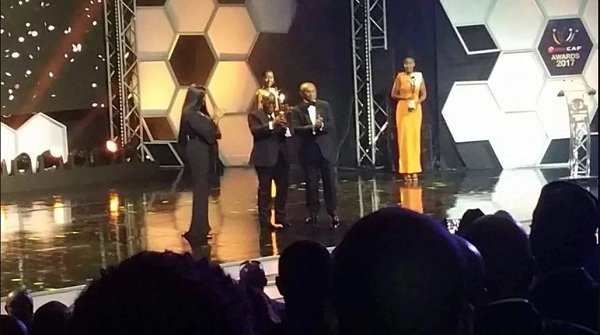 The ceremony saw Sadio Mane, Pierre-Emerick Aubameyang, and Mohamed Salah compete for the 2017 Africa Player of the Year Award.

President Akufo Addo speaking at the event expressed gratitude to the CAF, its executive body, and CAF President, Ahmad Ahmad, for choosing to host the 2017 edition of the African Player of the Year Award in Ghana.

READ ALSO: Interesting: This is why the Organizers of the CAF Awards stopped Shatta Wale from performing

President Akuffo Addo went on to say that last night’s event was the first of its kind that he had attended, and added that he is impressed by improvements President Ahmad Ahmad had undertaken during his relatively short time in office.

However, the likes of Patoranking, Wizkid, and Phyno who performed last night.

Meanwhile, the Egyptian international and Liverpool superstar Mohamed Salah has been named 2017 Caf African Player of the Year.

Check out the video of Nana Addo’ speech below…