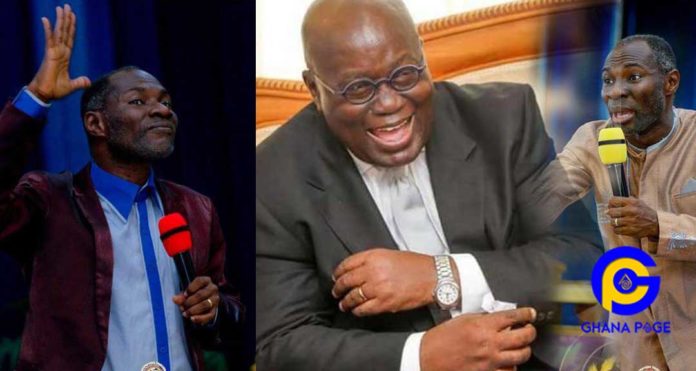 The founder and leader of Glorious Wave Church, Prophet Emmanuel Bad Kobi has boldly stated that Akufo Addo, the president if Ghana has not done enough to protect local business as expected of him but he expected it to happen when Nana Addo Dankwah Akufo Addo won the election.

According to Prophet Emmanuel Badu Kobi, when president Akufo-Addo stated that he was in a hurry during his inaugural ceremony and went on to repeat it in subsequent speeches, he knew the economic will be difficult and most likely, business can’t stand the hard economy.

Prophet Badu Kobi who has been tagged by many people as an NDC pastor explained that, in building a structure, the foundation is very important and a great deal of time should be spent in making it strong and formidable.

But, Akufo told Ghanaians he was in a hurry and that statement led him to make reckless decisions which have affected local business badly.

Badu Kobi questioned the logic in demanding GHS400 Million minimum deposit from local banks in Ghana which has led many to fold up.

He also questioned the mindset behind the collapsing of Menzgold when all those local businesses could have been regulated and made to stand well.

Badu Kobi made these revelations known when he appeared on Nana Kwame Afrifra’s show on Accra based Happy Fm for an interview.

Watch The Full Video Below (Scroll to 10:00 Minute for where he made these statements)

SEE ALSO: Owusu Bempah has no right to call himself the Nation’s Prophet – Badu Kobi explains why

On the same show, Badu Kobi revealed that NPP man of God, Rev, Owusu Bempah has no right to call him the Nation’s Prophet because he lacks 3 major spiritual things.