President Nana Addo Dankwa Akufo Addo has finally reacted to the recent floods in the country which claimed over 12 lives after receiving massive criticism from Ghanaians.

Akufo Addo in a tweet sent his condolences to the families that lost their loved ones in the two separate floods that hit the nation.

In his tweet, the president also disclosed that GHc 197 million has been released to the Ministry of Works and Housing to desilt choked drains to prevent floods as we get closer to the rainy season. 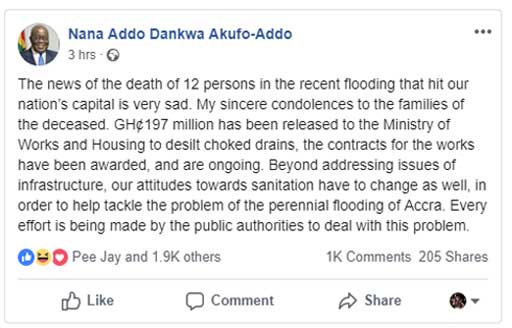 The President also advised Ghanaians to change their attitudes towards sanitation as it is the responsibility of every Ghanaian to ensure that our environments are clean.

He assured the public that his outfit is putting measures in place to deal with sanitation problems to prevent the unending flooding of Accra.

Ghanaians descended heavily on the president after he commiserated with the people of France after fire gutted the Notre Dame Cathedral.

Some felt the president was deaf to the cry of Ghanaians after 12 people perished in the recent flood.

The president was also accused of caring about the happenings in other countries than in his own country.

Wonders shall never end. A 10-year-old boy has been accused of impregnating a 13-year-old girl in Russia and this news since surfacing...
Read more
News

The graduate unemployment rate in Ghana currently is unimaginable. After graduation, the hopes of getting a job to make ends meet are...
Read more
News

Two halls in Accra Academy were destroyed by fire as reported on Wednesday 15th January 2020. Over a hundred students were displaced...
Read more
News

Ghpage.com just in some moments ago received a report that a lady identified to be a Nigerian has been beaten mercilessly by...
Read more