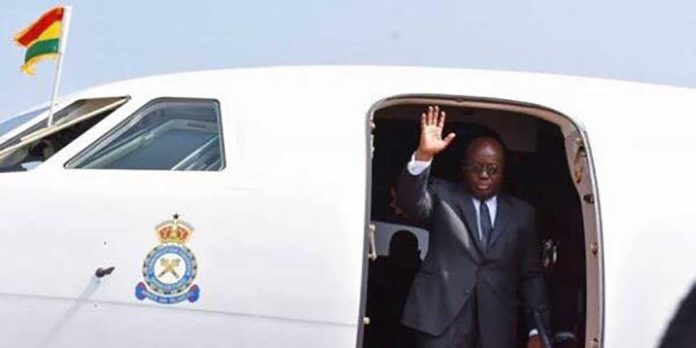 The president of Ghana, Nana Addo Dankwah Akufo-Addo and the delegation that traveled with him to the USA escaped a near-fatal plane crashed yesterday, 29th September 2018 on their way from Washinton to Ghana.

According to reports, the incident occurred as a result of engine failure of the presidential jet. The reports explained that one of the engines of the aircraft went off 30 minutes after take off.

SEE ALSO: Top Appointees Of Former Prez Mahama Under Corruption Investigation And Here Is All The List

The plane Ghpage.com gathers had to run around a number of times to burn fuel before being assisted to land.

Among other things, the president of Ghana talked about Africa’s unprecedented ‘marriage’ with China in recent times. He also touched on the death of former UN Secretary-General, Busumuru Kofi Annan.

Plans have been made for the president and his delegation to return to Ghana in a commercial plane.

It must be noted that this is not the first time the presidential jet has suffered such challenges. In March this year, the Presidential Jet caught fire while attempting to take off from the Kotoka International Airport.

On his way to the 30th National Farmers Day celebrations in the Western Region on December 5, 2014, the Presidential jet carrying former President Mahama developed a technical fault which delayed his appearance.

SEE ALSO: After years of lying about my husband, am shocked Ghanaians are now praising him in death – Amissah Arthur’s wife