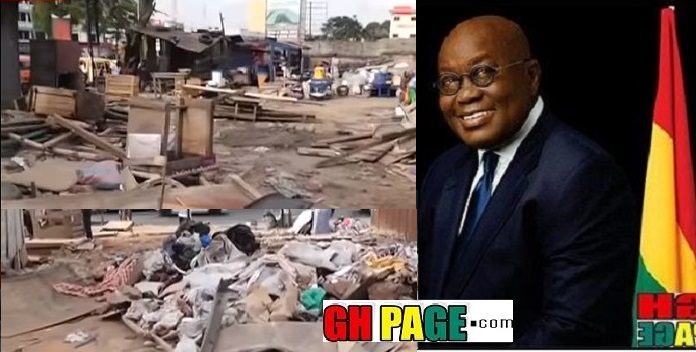 Neighbors living and working around the Nima residence near President Nana Akufo-Addo’s area have started moving out of their buildings following a directive from the National Security for them to leave.

The concerned people which include residents, traders, and artisans were commanded, last week, by National Security to leave the place because the area was now a security zone which needs to be ensured.

Thursday, March 15, was the amply deadline for them to evacuate the area, many of the afflicted people have destroyed their stopgap structures and had packed their belongings ready to leave.

Speaking in an interview with Joy News, a 60-year-old woman who said she had lived in the area for 34 years wailed that the compensation given to them will not be enough to relocate her in Accra.

She added that since the premium given to them is not enough to relocate her, she was going back to her village and would be visiting Accra to see her children who would remain in the capital.

However, the old woman in what sounded like a snide comment promised to come back from village to vote for the President when it is time for elections.

“We thank him. When it is time for elections, we will all come back to vote for him again,” she said while sobbing.

Meanwhile, a Senior Lecturer at the Political Science Department of the University of Ghana, Professor Ransford Gyampo, has condemned the unfortunate decision to expel the President’s neighbors.

According to him, President Akufo-Addo should move into the Flagstaff house and allow the artisans to continue their lives.

“The President must move to live at the Flagstaff house…it is as simple as that,” he said.

Watch the video below……

WATCH Continuation Of Eviction Of Traders: Oooh!! This Guy may be hilarious lol, but he has a point so sad..!!…!!

READ ME TOO: Video: Those Going To Kwahu This EASTER Here Is A SHOCKING Prophecy For You