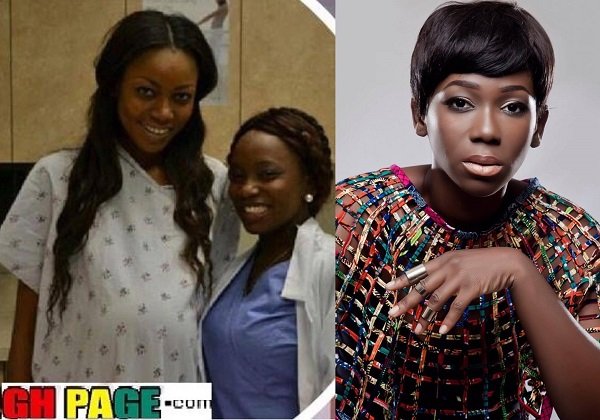 Ghanaian Actress, Ama K. Abebrese who is also a television presenter and producer has lambasted a Ghanaian blogger based in the United Kingdom over his choice of words which he used to describe the newly born baby of Yvonne Nelson.

The blogger who goes by the Chris Vincent published an article two days ago captioned ‘CHRIS-VINCENT Writes: And Yvonne Nelson Gave Birth to An UGLY Baby-Perhaps, A Bastard Even’

Ama, who from her choice of words seemed disappointed in Chris Vincent and she had this to say to him on Facebook.

READ ALSO: The Four Ghanaian Artistes Whose Hit Tracks Are Being Played By Every Radio & TV Station

I have just read your article indirectly insulting Yvonne Nelson and her reported newborn baby as an ‘ugly bastard’ under the guise of ‘classical British satire and sarcasm’ as you wrote. I am seriously wondering what decent British publication would stoop to the low levels you have done in your articles even under that guise. There was one I have seen where again under the guise of satire, Yvonne and any other woman who chooses not to reveal their pregnancies till birth are deemed as prostitutes and witches attributed to Lutterot.

I know that as a blogger, one who has made a very good career out sensationalist headlines and stories, you are known to push the envelope. However I don’t know what Yvonne Nelson’s body or any other woman for that matter and her choices about her pregnancy revelation has to do with you or any other blogger and journalist. You think your so called ‘exclusives’ and clicks on your website is more important than a woman’s choice about her body, health and pregnancy announcement. For all you know her doctors or medical professionals advised her to keep the pregnancy to herself. We don’t know if it was a high risk pregnancy or not. I’m merely speculating, maybe everything was fine and she just wanted to just keep it private, and guess what, she has every right to do so. Not to mention the risk of miscarriage, still births and other health risks as to why a woman many choose to not announce or corroborate her pregnancy till she is ready.

I know women whom right from a positive pregnancy test post theirs news on social media, and every aspect of their pregnancy, birth and children. I also know other women who have kept their pregnancy, birth and children from social media, for their own privacy. That’s their choice, each to their own. These days the trend of maternity shoots on social media is pretty common but not every woman wants that. It’s called a ‘private life’ for a reason. That’s the beauty of the world, we have choices.

I am not friends with Yvonne Nelson, she is an acquaintance at best. Just because she is a celebrity does not give you or anyone one else a right to come at her like this and her newborn child. How do you even stoop to that level to attack a new mother? Is it because of your so called exclusive story that she didn’t give you the satisfaction of corroborating.
She and anyone else has the right to post old pics on their social media, because guess what… she can, it’s her social media.

I am appalled and disgusted by your underhanded attack’s at her. You have a wife Chris. Maybe when she is pregnant, you and her will decide to detail every aspect of her pregnancy on social media. I hope that nobody comes out to write disgusting articles about her and your child, even under a satirical guise. I can’t imagine that after nine months of pregnancy when a new mother is caring for her new child, a blogger with your law degrees and masters sitting behind your computer writing rude and demeaning articles about her and her baby for clicks. Even if she is your worst enemy, she does not deserve this.
Most people would just congratulate and offer good wishes on a new mother and child, but not you.
Do you have any idea what women go through in pregnancy and birth, for you to come at her at such a time. Some women suffer postpartum depression, I’m not suggesting she is going through that, but imagine if she was and then sees what you wrote.
I hope she forgives you. It saddens me that I even have to write this in any woman’s defence. Have some integrity. You have a wife and a mother. If not anything, I’d like to believe that some sensationalism for clicks and revenue on your website is not worth more than basic human decency.

Yes I’m offended by your article and by your twisted logic, it’s because of ‘idiocy and dishonesty’. Well, it seems all your degrees and masters could not buy some basic ethics and decency in this case.

(Oh…. I won’t be surprised if the next set of articles and insults will probably be aimed at me. Go ahead. I really hope that you learn to tow the line somewhere).