After years of lying about my husband, am shocked Ghanaians are now praising him in death – Amissah Arthur’s wife 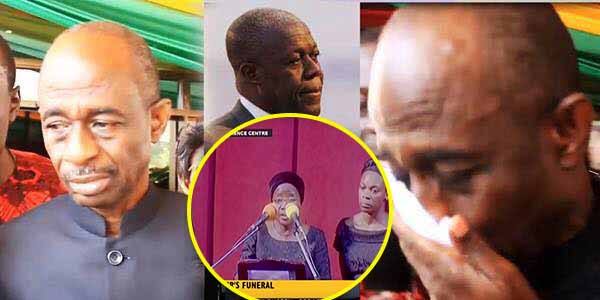 Today is the second day of the state funeral for the late vice president of Ghana, Mr. Paa Kwesi Amissah-Arthur, and Mrs. Matilda Amissah Arthur in her tribute took a swipe at politicians particularly NDC members for their hypocritical statements ever since her husband died.

Kwesi Amissah-Arthur died on June 29, 2018, after he collapsed at the Airforce Gym in Accra during a workout session. Tributes for the late Veep was read by loved ones and high profiled personalities including the current vice president of Ghana, Dr. Mahamudu Bawumia.

During the tribute by Mrs. Matilda Amissah Arthur,  questioned the love she has received over the past few weeks since the husband died especially when their own party marginalized him when he was alive.

She couldn’t imagine the good things said about the husband the past few weeks considering how NDC members and some Ghanaians called the husband names, insulted him for no reason just because he wouldn’t hit back

Even prior to the 2016 General elections, the opposition NPP labeled him as a gay and called him several demeaning names.

It’s therefore shocking that they have all joined the bandwagon praising him. His message was obviously not meant for just the NDC but both NPP and entire Ghanaians.

“I have received so much love and heard soo many good things about my husband the past few weeks since he died and I asked myself, is this Ghana? Are all these people in Ghana because the maligning, the lies, the treachery, the wickedness, the deliberately changing things so that you could look better than others.”

SEE ALSO: Amissah-Arthur was thrown into a pickup car; no ambulance – Okyenhene

“Today I asked the same question, did people really know my husband. Did people take time to know him? The false accusations, the lies, the maligning. Did they know him?”

Irrespective of the outrage, she added that the family knew him and the love him

“We knew you, and we know you are a rare gem, and we treasure you, and we are very proud of you,” she said.

“A thousand tears won’t bring you back. I know because I have cried. But I know that you made your mark in this country and beyond and you touched many lives and those who cared to know you and those who gave you time to prove yourself know what a rare gem you are.”

Mr. Amissah Arthur, died at the age of 67 leaving behind a wife and two children. He was buried today at the Military Cemetery.