Being mistaken for Anas has affected me – Salinko 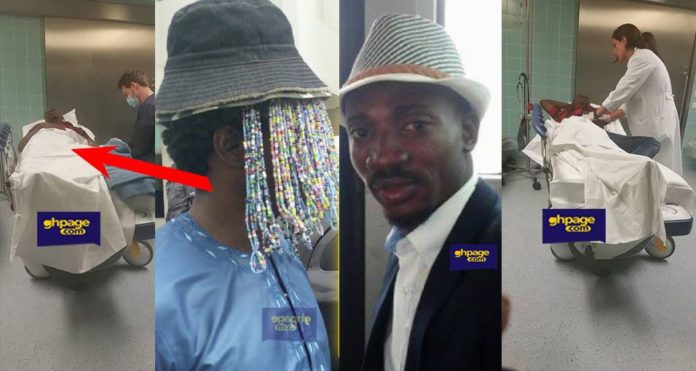 Oboy Salinko has revealed that since investigative journalist, Anas Aremeyaw Anas released his explosive investigative piece dubbed Number 12, it has affected him due to his picture which was earlier released by MP for Assin Central, Kennedy Agyapong as Anas.

Among the photos circulated online by the Member of Parliament for Assin Central, Hon. Kennedy Ohene Agyapong as the real photos of the ace investigative journalist, Anas Aremeyaw Anas was one photo which turned out to be an old photo of Kumawood actor, Oboy Salinko.

When the photo hit social media, Salinko came out to claim the ownership of the photo and revealed he took the photo on set. He denied being Anas and threated to sue Hon. Kennedy Agyapong for putting his life in danger.

According to Salinko, when his photo was first shared by Kennedy Agyapong on his television network, NET2, he treated it as a mere joke until he was turned down by three private companies including TT Brothers when he was looking for sponsorship for his show Boys Abre on UTV.

“Apart from being turned down by companies when the issue happened, I also received threatening messages from unknown numbers. What I am saying is not for hype, anything could have happened to me,” Salinko said.

Speaking in an interview with Showbiz, he further explained that he was forced by his family members to do a video to explain that he was not Anas and then follow up to the police station if the situation got out of hand.

“I had to hide sometimes in fear. I could have been lynched by people who hate Anas and that would have been sad news because I am a family man,” he said.

He added that he had to travel to Germany to cool off to allow the issue to die naturally but at a party in Germany Salinko’s drink was allegedly been poisoned by unknown person(s).

It’s unclear why he was poisoned or who poisoned him but the Ghanaian community in Germany blamed Kennedy Agyapong for putting his life in danger.

“I had to travel to Germany although I had no intention of doing that. I am glad a few friends shared the video I made denying that I was Anas and I am now a free man,” he said.

Salinko, real name Davis Abraham, also expressed his disappointment in Hon. Kennedy Agyapong for his reaction after he came out to say he was not Anas.

“I expected Kennedy Agyapong to apologise since he released my picture and not insult me on Adom FM that I am a fool and no one should take me serious. This was a serious issue that could have caused my death,”

In an attempt to clear the air and misconception, Salinko said he would be releasing a movie titled Number 13 that will clear his name further and also highlight the plight of people who are in jail for crimes they didn’t commit.

According to him, the movie, which features actors such as Wayoosi, Akosua Adjapong, Bishop Bernard Nyarko, Big Akwes and Jagger Pee is expected to come out next month.