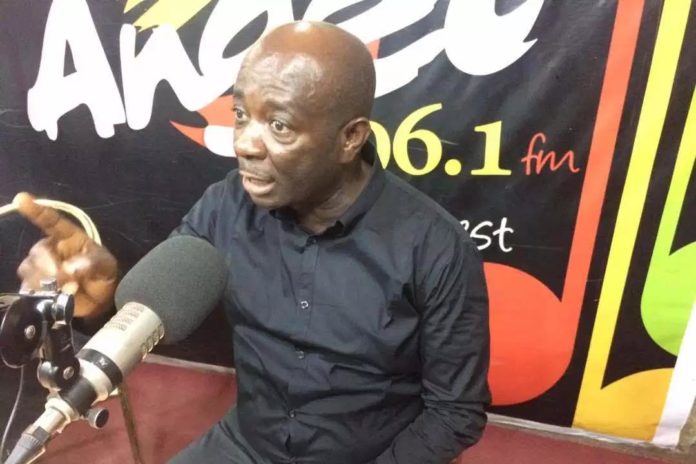 The former presidential aspirant for United Progressive Party (UPP), Akwasi Addai Odike has described the strategy used by ace investigative journalist, Anas Aremeyaw Anas, as unconstitutional and must not be entertained anywhere.

Last Tuesday, the deputy chief of staff Samuel Abu Jinapor in an interview with the press announced that the President Nana Addo Dankwa Akuffo Addo has ordered for the immediate arrest of the President of the Ghana Football Association (GFA) Kwesi Nyantakyi after it was revealed in Anas yet to be released work for using the name of the President to defraud potential investors.

Also Read: EC boss is stupid and foolish; She doesn’t qualify for her position – Hassan Ayariga

Mr Nyantakyi who was not in the country by then returned on Wednesday and was subjected to a 5-hour interrogation by the Criminal Investigations Department stationed at the airport few minutes after touching down from a short trip from Morocco where he was on official duties.

Commenting on the trending issue on Kumasi based Angel FM with sit-in host Yaw Nimako, Odike revealed that, it’s not the first time someone in the country is using the President’s name to lure investors into the country as he even did same under erstwhile ex-President Mahama’s administration when his German businessmen came to see him.

“I even went ahead to introduce them to then President Mahama”, he bragged.

‘Yaw, we all use the president’s name to eat, come on that is why they call some of us hobbyists. It is simple as that…He did nothing new. What Anas is doing is criminal. Someone should bring him to order’, he advised

He furthered stated that the money request by Kwesi Nyantakyi was too small and that he should have even requested for more money.

Also Read: “To God Be The Glory” – Countryman Songo Finally Speaks On The Nyantakyi Arrest

While observing that there is absolutely nothing wrong in the conduct of Kwesi Nyantakyi in the whole matter he advised that the issue must be treated with the contempt it deserves as the modus operandi falls flat on the face.

“ The strategy Anas used, even the ‘holiest of holy’ will fall for it and besides, his work is inconclusive as we can’t establish whether indeed, Kwesi Nyantakyi went ahead to take the money or not so bribery doesn’t come in here”. He added

He begged the President [Akufo-Addo] to let this go as Kwesi Nyantakyi bragged with his ‘father’s’ name which makes it a civil matter and as a grandfather, he should have a big heart to forgive his children.