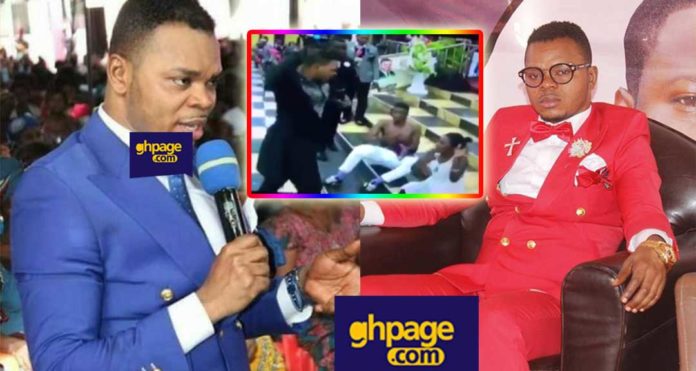 Bishop Daniel Obinim, the founder and leader of Godsway Ministries International and his two junior pastors, Kingsley Baah and Solomon Abraham have been fined GH¢12,000 for assaulting 2 teenagers. They were also made to sign a bond to be of good behavior for the next 12 months.

The 3 were convicted for assaulting two adopted children in the presence of his congregation; a 14-year-old girl and a 16-year-old boy who lived with him.

Speaking after the court rose, the lawyer for Obinim said told the media:

“We are satisfied and the court has done justice to the case. My client has learned his lessons”.

In August 2016, Obinim sparked uproar in Ghana when he lashed two teenagers after he claimed God has revealed to him the two have fornicated.

Angel Obinim explained that the two were planning on aborting the baby when God revealed it to him.

As punishment for their sins, Obinim lashed the boy and girl in inside his church at the Accra Branch. His two associates held on two teenagers whiles Obinim lashed.