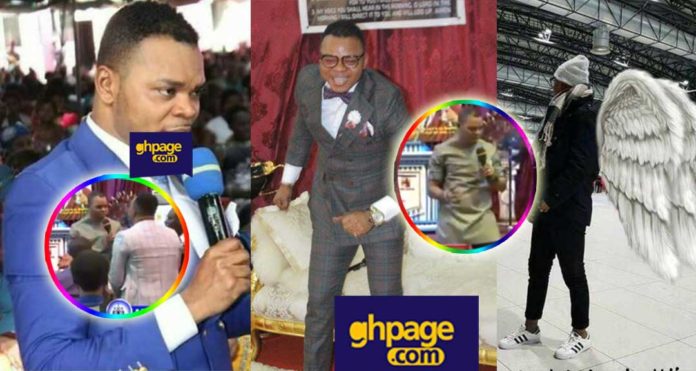 The founder and leader of Gods Way International, Bishop Daniel Obinim has once again attempted to fly to heaven during church service but he failed to do so because his congregation begged him not to fly away.

During church service, Bishop Danie Obinim Angel stated that he feels like flying away and he has the urge to vanish. The controversial pastor asked his congregation to take a good look at him when he is flying away because he really has the urge to fly away.

Angel Obinim urged his church members to capture the moment with their phones’ cameras because he was really going to literally fly away. However, his junior pastors and congregation begged him not to fly.

According to his Junior Pastors and Church members, flying away will hurt the church because they don’t know if God will allow him to return to them.

Angel Obinim had no choice but to abandon his plan to fly away. He, however, warned that if you don’t believe in him sit anywhere and ridicule his attempt to fly away, he gives you 3 days.

This is not the first time Angel Obinim has attempted to fly away during church service. Some weeks ago, he tried to fly away but he fell and was luckily caught by his Junior pastor.

He later came out with the explanation that he was just joking with his Junior pastors and they all understand the game he was playing.

SEE HERE: Video: Bishop Daniel Obinim causes another stir on social media as he attempts to fly to Heaven