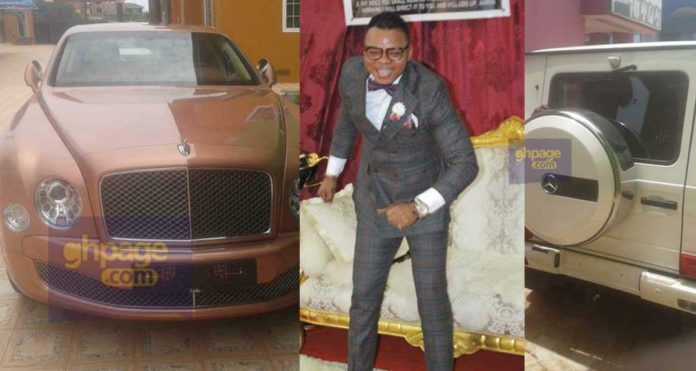 The founder and leader of the International Godsway Church (IGWC), Bishop Daniel Obinim has reportedly bought two brand new luxury vehicles for his use this week.

According to the report, Bishop Daniel Obinim has acquired two luxurious vehicles, Rolls Royce Phantom and G-Wagon to be used for his comfort.

CHECK OUT THE CARS BELOW

Interestingly, many people believe Obinim bought the car to challenge Asanteman Bofur who bought his Rolls Royce Phantom a few weeks ago after he gave his Rolls Royce Ghost to his wife on her outdooring ceremony.

For some strange reasons, Angel Obinim and Rev. Obofuor have been at each other’s throat. They have called each other names and made serious allegations against each other.

Basically, the two are fighting over who is a real angel and who is fake. Obofuor claims he is the only Angel of his generation in the entire world whiles Angel Obinim also claims he is an archangel and as such, has control over all of the angels including Obofuor.