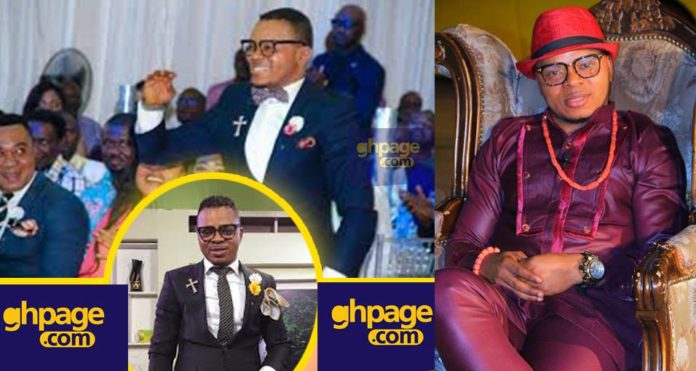 Founder and leader of The International God’s Way Church, Bishop Daniel Obinim has caused yet another stir on social media with a latest video of one of his church services in which he was struggling to pronounce a word.

The popular Man of God was seen in a latest video trying to wrap his head around the pronunciation of ‘Lyrics’.

Also Read: Video: Bishop Daniel Obinim causes another stir on social media as he attempts to fly to Heaven

In one of his deliverance sessions, a young lady of 12 years old who was gifted with the ability to write her own songs, revealed her rare gift to the Man of God.

She indicated that lyrics of songs were divinely revealed to her sometimes and she penned them down and arranged them later.

However, the popular prophet, in a bid to pronounce the word “Lyrics”, had to ask the young lady to keep repeating it to his hearing and continuously kept mentioning it wrongly.

One of his pastors even tried to help out by mentioning the word but the popular ‘Angel’ of God kept getting the pronunciation wrong.

Also Read: Video: Lucifer is jealous I can change into a snake &other animals -Obinim recounts his last visit to Heaven

Angel Obinim has been in the news over the last couple of weeks for the many controversial statements he continues to make. Not too long ago, the pastor indicated that Jesus Christ had made a lot of mistakes and was disrespectful.

Quite recently, the man of God indicated that 2 of his angel friends wanted to punish some pastors in Ghana.

Bishop Daniel Obinim is arguably one of Ghana’s most influential Men of God.

Also Read: Another Blasphemy As ‘Angel’ Obinim Blasts Jesus Christ For The Many Mistakes He Made In The Bible

Watch the video Below

The self-proclaiming angel of God is noted for his stylish way of dressing and for the many miracles he works for some of his congregants. He is also counted among the richest Men of God in the country because he boasts of many houses and expensive cars.

Aside the fact that many people do not side with some of the antics and controversies, the Man of God has been involved in, he commands a huge church following both in Kumasi and Accra. The Man of God is married to local gospel sensation, Florence Obinim.

It is believed that he is the producer of all the songs credited to the gospel songstress.