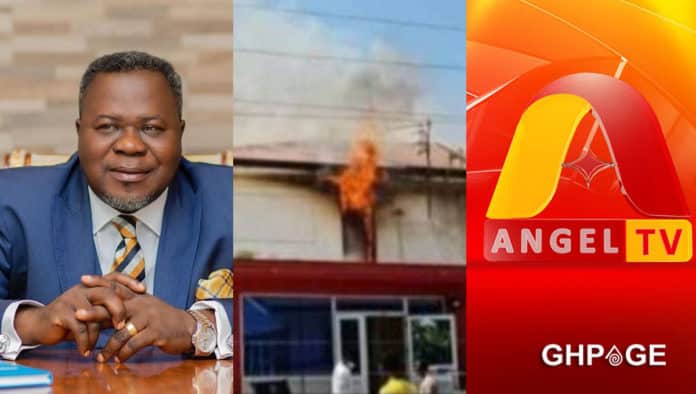 The management of Accra-based television network, Angel TV, has restored operations of the station less than 24 hours after its premises was gutted by fire on Sunday, August 15.

The TV station which is a subsidiary of Dr. Kwaku Oteng’s Angel Broadcasting Network went off air after the inferno razed down the entire building of the media company to ashes.

According to sources at Angel TV, the fire swept through one of the studios and the Master Control Room (MCR), destroying several items in the building.

Reports say, the Ghana National Fire Service (GNFS) were able to douse the fire but from the look of the videos and images circulating online, it was actually a fruitless effort as the building was burnt beyond saving.

See the aftermath of the fire below.

Following this, the management of the TV station assured its viewers and clients that efforts were being made to come back on air.

A video sighted by GHPage on social media shows that Angel TV is back on air.

They played a worship song of Diana Hamilton as they continue to bring things back to normalcy.

The cause of the fire is not known yet.