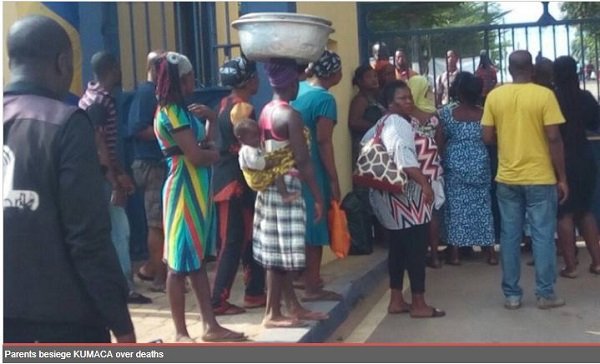 Angry parents and guardians who wards attend Kumasi Academy have raged the campus of the institution over the reports of the sudden deadly disease outbreak within the past weeks.

Parents and guardians who are furious over the sad incident collide with the security personnel and the authorities in the school insisting on sending their wards out from the school with the fear of falling as victims to the disease which within a week has claimed lives of six students.

However, the school authorities who in other way think some of the students might have contracted the fearful disease and may spread it if allowed home also did everything possible to prevent the parents from taking their children home.

The Ghana Health Service dealing with the situation on Monday suggested that all students of the Kumasi Academy will be vaccinated before they will be allowed to go home and that might have called for the school’s authorities rigid decision.

Well, the Ashanti regional police command assisting the parent-authority clash has deployed Police to control the situation to prevent any further violence.

He added that it will be better for his child to fail the upcoming exams than to die mysteriously in the school.

” I don’t want to wait for my child to die before I come. I heard the news and since I am also working with Garden city hospital I saw two students being rushed this morning from the school for treatment. So I had to come here to pick my ward. Even though its exam week, it is better for him to fail the exam than to die here”. he complained.

And in all, 13 students have been confirmed dead since April 2017 this year.