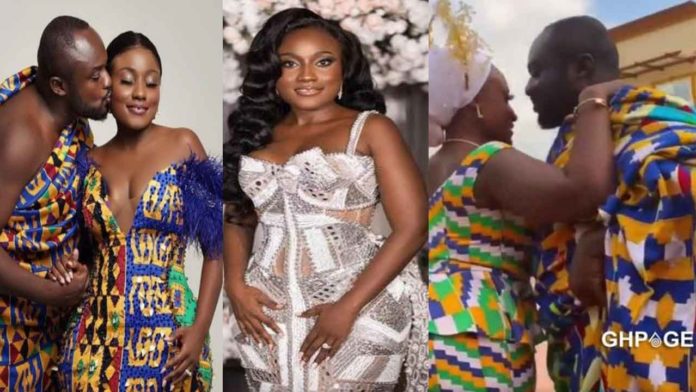 It is alleged that the marriage between Anita Sefa Boakye and the CEO of Adinkra Pie, Barima Osei Mensah has hit the rocks barely a year after their lavish wedding.

According to sources, Anita has reportedly returned the drinks to Barima’s family members signalling the end of the marriage.

This unfortunate news was shared by Instagram blogger Tutugyagu who claimed she received the information from a source close to the couple.

Even though the reason for Anita’s action was not revealed, it was reported that they have been fighting since they tied the knot.

Anita and her husband, Barima Osei Mensah got married in November 2021 in a glamorous ceremony which was the talk of town.

Some netizens have shared their sentiments when ad news about the ‘Kumasi Royal wedding’ went viral.

Agbo Sena wrote; “Two wise people cannot marry, one has to be foolish”.

Sweet badd added; “Marriage is not for everyone. Let’s wish them both well”.

aphazek77 stated; “Not surprised…from the man’s trailing baby mamas bio and his demeanour during the chain of marriage ceremonies, it is bound to happen. Advice; keep your important life off social media”.

realtalyanice commented; “I’m very sure cheating has set in, because that Barima guy no di333, I won’t be surprised at all”.

harriet_ahiabu also added; “Maybe she’s not being submissive to the man as a wife, cos of her money, cos all that men need from a woman is Respect and for a woman not to respect a man, that maybe because she has money”.

efyadonkor_gh stated; “In fact not all that glitters is gold”.