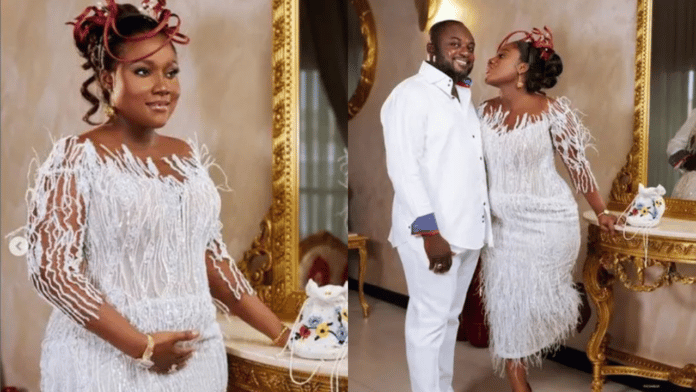 Anita Sefa Boakye has finally confirmed the viral reports that she has taken seed after walking down the aisle with Barimah Osei Mensah just about a year ago.

Over the weekends, the celebrity couples were spotted at the 50th birthday celebration of Mama Atlanta that came off at East-Legon in Accra.

Videos from the plush event that landed on the internet captured Anita Sefa Boakye’s heavy pregnancy that later became the talk of town a few hours after the videos were published on the local digital space.

While a section of social media users congratulated Anita, others also rubbished the claims that she was pregnant and suggested that it was her tummy which has grown big.

To make things, Anita Sefa Bokaye has shared a set of nice baby bump pictures on her social media pages.

In these photos, Anita stunned in a well-tailored corset lace dress while he husband also rocked a beautiful all-white attire with a little touch of blue and red.

Take a look at the photos below to know more…

Barima Osei Mensah and Anita Sefa Boakye were branded a ”celebrity couple” after they shot into the limelight due to their glamorous wedding in 2021.

The couple has since had media lenses and public eyes on their marriage, and recent hearsays had it that their young marriage had hit the rocks which were later found out to be fake news.