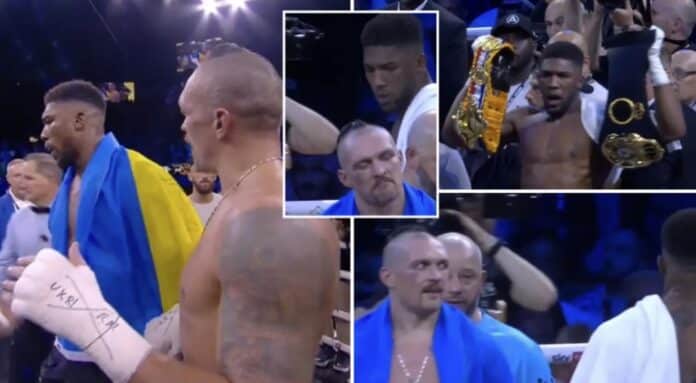 After losing to Oleksandr Usyk, Anthony Joshua tossed the heavyweight championship belts out of the ring and then took over the microphone to make an odd speech.

Usyk defeated the legendary British boxer a second time, this time by a split decision.

Joshua appeared to storm off after the verdict was given and threw Usyk’s belts out of the ring.

He made the decision to go back to the squared circle and extend a handshake to his rival.

However, when they conversed in the ring, AJ said: “Strength is not important to me; I need competence instead.”

“Boxing is not a sport where strength wins. Boxing is won by skill.

“You’re not strong. How did you beat me? How? Because of skill.

“I had character and determination. Where’s the mic?”

Then the Brit grabbed hold of it to deliver an impassioned speech to the crowd.

Joshua, 32, said: “If you knew my story, you would understand the passion.”

“I ain’t no amateur boxer from five-years-old that was an elite prospect from youth.

I was going to jail. I got bail, and I started training my a*** off, I wanted to be able to fight.

“I’m stealing this Usyk.” I’m sorry, but it’s because of the passion we put into this.

“This guy beat me tonight. Maybe I could have done better, but it shows the level of hard work I put in, so please give him a round of applause as our heavyweight champion of the world.”